Coal to the Rescue Again

Coal to the Rescue Again

The polar vortex is back in all of its frigid fury. On Tuesday, the majority of 10 states woke to temperatures below zero and the bitter cold is here to stay through at least the middle of the month.

On the Midcontinent Independent System Operator (MISO) grid, which stretches across 15 states and the Canadian province of Manitoba, coal generation is meeting more than half of daily power demand. Natural gas and nuclear power are meeting much of the remainder with wind and solar generation a footnote. In fact, coal-based generation in the MISO region surged 36 percent in January from the previous year as natural gas power fell sharply.

On these sub-zero days, when a no-regrets grid and power supply are a matter of life and death, the fuel security, dispatchability and reliability of the coal fleet seems very much a blessing – not a problem to be dismantled and junked.

Again and again, the coal fleet has come to the rescue across the country when deep freezes test the nation’s energy supply. Whether polar vortexes or bomb cyclones, when bitter cold grips the U.S. the much-maligned coal fleet is there. But for how much longer?

State clean energy standards that would force the early closure of essential coal capacity are now being matched by a range of federal proposals. President Biden has called for clearing the grid of all traditional fossil fuel generation by 2035. If the Green New Dealers had their way, it would be even sooner.

How exactly is this grand pivot supposed to work? Aspirational targets are the easy part. What is proving far, far more difficult is building a grid that can actually lean on variable renewable power and deliver it when it’s needed most.

Whether summer or winter, reliability challenges are becoming a feature of renewable-heavy grids. California found itself short capacity during a heatwave this summer when solar generation plummeted at nightfall and temperatures remained searing. Faced with the possible collapse of the Western grid, California’s grid operators were forced to institute rolling blackouts to shave demand.

Last winter in MISO, during frigid weather, wind generation collapsed when it was needed most. Turbines stopped operating at minus 20 degrees Fahrenheit and actually started pulling power from the grid instead of supplying it.

In the U.K., which is racing to ever-greater reliance on wind power, the national grid operator has already issued four warnings this winter about electricity demand potentially exceeding supply. Britain is burning more coal than it has in two years to keep the lights on.

But the most startling example of the challenges ahead comes from Germany. On December 14, 2018, renewable generation, which on a normal day was expected to meet 40 percent of power demand, collapsed. Conventional power plants – namely coal plants – picked up the slack meeting roughly 75 percent of demand.

Those dark and windless days – the December 14ths – are such a problem in Germany, they’ve been given their own word, “dunkelflauten,” or “dark doldrums.”

While the Germans may have figured out the perfect word to capture the angst of collapsing renewable power when the weather doesn’t cooperate, they haven’t yet figured out the solution. Nor have we.

Academic papers and models continue to point to a massive and rapid expansion of the nation’s electricity transmission infrastructure as an anecdote to the dark doldrums, moving surplus power from one region of the country to where it’s needed. But new interstate transmission is about the most difficult energy infrastructure to permit and build. It’s a proposed solution completely detached from on-the-ground reality.

The distance between aspiration and reality is jaw-droppingly vast. With a no-regrets supply of power our foremost responsibility, smart policy should recognize and reward the reliability and fuel security provided by the nation’s coal fleet. The polar vortexes will keep coming. Whether or not we continue to have the tools to navigate them remains to be seen. 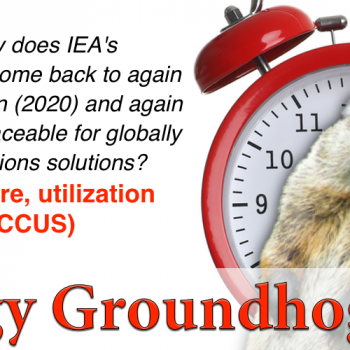 It's a Mistake to Retire Coal Plant