“It’s technically possible,” is not the type of a response you want to hear from any expert. It’s the kind of response you get when something is brutally impossible but the person delivering the news wants to soften the blow.

A new study from researchers at Princeton charting what’s needed to achieve net-zero U.S. emissions by 2050 has concluded it’s “technically feasible.” In the timeless words of Scooby Doo, that translates to “ruh-roh.”

Now that the rhetoric of campaign season is fading and we are returning to some semblance of sober policy analysis, it’s becoming clear that proposals to move at warp speed to upend the nation’s energy mix aren’t terribly serious. They’re models and ideas and they are extraordinarily divorced from reality.

This is not to say we shouldn’t pursue emissions reduction. It’s simply a reality check about the art of the possible and the necessity of preserving reliable and affordable power while producing an approach to emissions action that is globally replicable.

Consider just a few of the upending changes from the Princeton study that would be needed in just the first ten years of this effort, an effort that is supposed to begin immediately: Adding 50 million electric vehicles, quadrupling wind and solar capacity and expanding high voltage transmission infrastructure by 60 percent.

Leaving aside costs, the technical complexity of each one of these tasks is gargantuan but the political complexities and difficulties – often at the local level – are arguably the even higher mountain to climb.

A massive expansion of high-voltage transmission infrastructure is a feature of every model that projects significant growth of renewable power. It’s the silver bullet that harnesses the best of the renewable resources and allows power to move hundreds of miles to balance the grid, filling holes on cloudy days or accounting for windless days or weeks in some states. But, building new transmission lines is about as difficult in the real world as getting a toddler to sit quietly through church.

Look to Germany as an example. Already more than a decade into a boondoggle of an effort to pivot to a solely wind and solar future, Germany has found building transmission highways to move power from the north of the country to the industrial south to be a disaster.

As Bloomberg recently reported, “[t]he projected cost of building Germany’s green power ‘autobahn’ is steadily climbing, setting up electricity consumers with an ever increasing bill… Severe delays have seen spending soar more almost fivefold to 95 billion euros ($111 billion).” A year ago, when the power autobahn was just 50 percent over budget, it was already being called a “catastrophe” by Germany’s minister of the economy and energy.

Pretending the U.S. can and will do better is willful ignorance. Building a renewable future upon a foundation requiring expanding the nation’s high-voltage infrastructure 60 percent in a decade is a recipe for disaster.

Just this week in California three state agencies released analysis outlining a roadmap to enable the state’s proposed transition to 100 percent emissions-free electricity by 2045. Not surprisingly, they too found the effort technically achievable, while adding, as if as an afterthought, that a future reliability assessment should be conducted to see if the plan could hurt system reliability. With reliability put firmly in the backseat, it’s increasingly clear why California suffered rolling blackouts this summer due to poor management of the state’s increasing reliance on intermittent power.

There has to be balance. Affordability and reliability shouldn’t be sacrificed by gamed models or politically convenient roadmaps. They shouldn’t have to rest precariously on plans bound to fail. Before we launch into a plan the optimists tell us is “technically possible,” a little humility and some appreciation of the grid we have would go a long way. The balance, affordability and reliability of the current grid and mix of fuels won’t last if we’re determined to undermine it. 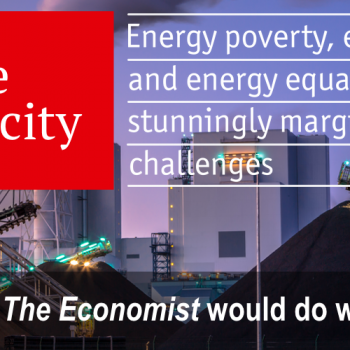 WV Coal: Back to the Future