How valuable is a balanced, diverse mix of energy sources? Just ask the Midcontinent Independent System Operator (MISO), the grid operator that manages the electricity grid for much of the U.S. Midwest and parts of Canada.

When the polar vortex hammered the Midwest at the end of January, the grid weathered the storm, but it was hardly smooth sailing. The grid was nearly pushed to the limit and providing much of the stress on the grid was wind power – or rather the lack of it.

At the start of the three-day stretch of sub-zero temperatures, wind turbines from Minnesota to Iowa were providing about half of the region’s power. And then as temperatures continued to drop, so did the wind generation.

On January 30th, when MISO declared a maximum generation event – a call to all hands on deck – just half of the wind generation forecasted to supply power to the grid actually could.

Not only was the decline in wind speed a factor, but when temperatures fell below minus 20 F, wind farms automatically started shutting down. Extreme cold can damage different pieces of the turbine. Instead of helping keep the power and heat on for the region’s consumers, wind farms became electricity users – they needed electricity from the grid to heat them to avoid damage.

As wind power evaporated from the grid, it was primarily coal generation that came to the rescue. In two regional grids most heavily affected by the bitter cold, coal plants provided about half of the electricity needed at the coldest moments on the deep freeze. On a normal day, they supply about a third of those grids’ power needs.

A balanced, diverse energy mix matters. When one fuel source can’t deliver, another can step in to ensure a reliable supply of power. While every energy source comes with limitations, wind and solar power’s dependence on the whims of the weather is a challenge that can’t be overlooked.

And yet, states, such as Minnesota, are considering phasing out their fossil fuel generation. Green energy boosters there are pushing 80 percent reliance on renewables by 2035 and 100 percent by 2050. These are goals that clearly jeopardize the reliability and affordability of the grid but also fly right in the face of well-demonstrated technological limitations. Nonetheless, this proposal – as impractical as it clearly seems – is hardly the most radical to have surfaced at the state or national level. Here’s looking at you Green New Deal.

The technological hurdles of accounting for the sudden and extended loss of renewable generation are something that must inform state and federal energy policy. Batteries and grid-scale energy storage are hardly a cure-all. The best grid-scale batteries appear to offer but a few hours of backup.

Germany, pressing on with its own radical energy transition and now weighing phasing out coal generation, is staring down the challenge of the peaks and valleys of renewable generation as well. Wind and solar power accounted for 40 percent of German electricity generation in 2018, but on some days wind and solar were of almost no use.

A slide prepared by Dr. Hans-Wilhelm Schiffer, the executive chair of the World Energy Resources program of the World Energy Council, illustrates the point. On December 14, 2018, weather variability meant that wind and solar power barely contributed to Germany’s energy needs. Due to the fickle nature of renewables, conventional power plants – namely coal plants – were required to meet three quarters of Germany’s power demand. 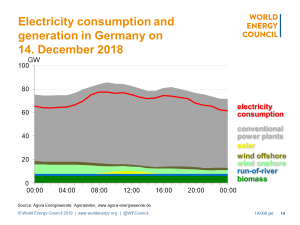 Dr. Schiffer’s example still only hints at the full scale of the renewable variability challenge. It’s not one- or two-day events that are the tallest hurdles. The bigger challenge comes from the seasonal changes that can – and do – mean weeks or months when wind and solar generation falls dramatically. Even if our current mix of fuel sources makes providing a reliable, affordable and secure supply of power seem easy, it’s not. We are teetering on the edge of ditching what works for a crisis of our own making.