Today, the U.S. Environmental Protection Agency (EPA) is proposing a rule to clarify the process for evaluating whether a New Source Review (NSR) preconstruction permit is needed when an existing major-emitting facility plans to make changes or expand.

“Today’s proposal is an important step towards President Trump’s goal of reforming the elements of NSR that regularly discouraged facilities from upgrading and deploying the latest energy efficient technologies,” said EPA Administrator Andrew Wheeler. “By simplifying the permitting process and implementing a common-sense interpretation of our NSR rules, we will remove a major obstacle to the construction of cleaner and more efficient facilities.”

On March 13, 2018, then Administrator Scott Pruitt issued a guidance memorandum explaining that EPA’s current NSR rules were reasonably interpreted to provide that, at the outset of the process to determine NSR applicability, emissions decreases projected to result from a proposed project could be taken into account along with any projected emissions increases. This rule codifies and implements that 2018 guidance memorandum by making minor revisions to the text of the NSR permitting rules, to provide clarity and certainty to the regulated community.

NSR provisions require preconstruction permits when a facility plans to make “major modifications” or otherwise expand operations that may increase its air emissions.  Determining whether a proposed project triggers the threshold to obtain an NSR permit is a two-step process. At Step 1, a determination must be made whether the proposed project will, by itself, result in a significant emissions increase. If a significant emissions increase is projected to occur, the process moves on to Step 2, where a determination must be made whether there will be an overall increase in emissions, when all of the other emissions increases and emissions decreases that may have occurred at the facility over the preceding several years, and which are unrelated to the proposed project, are accounted for. This Step 2 “contemporaneous netting” calculation can be complicated and time-consuming to undertake.

This proposal clarifies that both projected emissions increases and projected decreases that are attributable to a proposed project can be considered during Step 1 of the two-step NSR applicability test. This process, once called “project netting,” is now more accurately known as project emissions accounting.

EPA expects that allowing emissions accounting at Step 1 will reduce regulatory burden — saving time and money without sacrificing environmental protection. If the results of this Step 1 evaluation show that the proposed project will not result in a significant emissions increase (e.g., because any emissions increases attributable to the project are offset by emissions decreases occurring elsewhere at the source due to the project), this would end the applicability evaluation. In general, the project could then proceed under a state-issued minor source permit. This saves resources that would otherwise be required for a complex multi-unit evaluation prior to a major NSR permit applicability determination.

EPA will accept public comment on this proposal for 60 days after it is published in the Federal Register.

Grappling with the Global Challenge 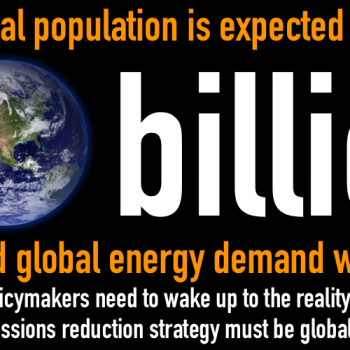 Costly Alternative Energy Cause for Concern