Via The Nebraska Examiner:

As freezing weather sets in, is there any doubt that few things are more important than heat and light? In Nebraska, we’ve enjoyed the benefits from abundant energy production for so long that we’ve taken them for granted.

But the need for a secure supply of electricity has reminded us that maintaining power reliability is never simple. The North American Electric Reliability Corporation (NERC), which monitors the electricity system, recently warned that a large portion of North America is at risk of insufficient electricity supplies during peak winter weather and that “energy emergencies are likely in extreme conditions.”

NERC said power reserve margins in the region monitored by the Midcontinent Independent System Operator (MISO) have declined 5% since last winter as the loss of power due to power plant retirements has exceeded replacement capacity.

In fact, hundreds of coal plants across the country have been closed in the past decade. And more losses are expected. Half of the Midwest’s coal fleet — 27,000 megawatts — is set to be shuttered by 2030, and forthcoming EPA regulations could push coal plant retirements even higher. At an auction of wholesale electricity, there was an alarming fiftyfold increase in Midwest power capacity prices from a year ago.

Nebraska relies mainly on coal for electricity production — about 48% of capacity compared to a national average of 20%, along with wind at 25%, nuclear power 18% and natural gas 4%.

The big question is whether Nebraska will run its coal plants around the clock or only occasionally, as a backup for wind power. Some have argued that the Midwest’s future power needs can be satisfied largely through wind and solar. President Joe Biden even went so far as to say that the nation’s fleet of coal plants should be shut down and replaced by wind and solar power. But even under the most optimistic assessment of renewables, the Midwest will continue to rely on base-load power from coal and nuclear energy. To do otherwise would wreck the reliability of the electricity system, plunging the Midwest into power blackouts, industrial shutdowns and energy insecurity.

The danger is that concerns about climate change will lead to missteps. According to NERC, the premature retirements of baseload power plants, combined with the intermittency of wind and solar, have seriously impaired grid resilience and reliability. Fortunately, electric utilities are aware of the problem and have taken steps to delay coal plant retirements until replacement power becomes available. As many as 40 coal plants that were slated for closure over the next year will remain on line for up to five years (including the North Omaha Station). Meanwhile, the federal government has earmarked funds to keep emission-free nuclear plants operating.

What is important about this is that cooler heads are prevailing in the debate over climate change. In energy policy circles, there is a growing sense that we need a commitment to stay the course and not let changing national priorities divert us from paying attention to the need for a stable and secure energy supply. 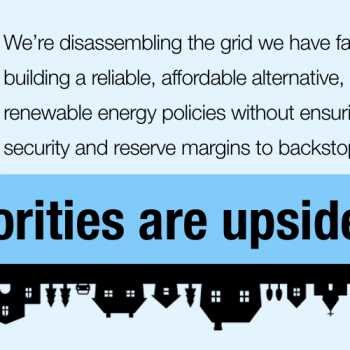 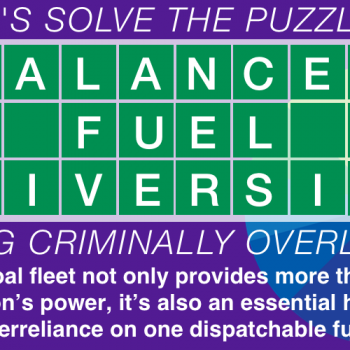