For all the activist handwringing over domestic climate policy, for all the soup thrown on priceless works of art or the trepidation of European governments to turn back on a handful of coal plants in the face of an unprecedented energy crisis, the climate story is increasingly coming down to one country. China is piloting this ship and we’re all just along for the ride.

China’s energy consumption is so large – such an outlier – it’s easy to lose perspective on the industrial juggernaut. According to the Rhodium Group, China now accounts for more greenhouse gas emissions than the rest of the industrialized world combined. China’s share of global emissions is more than double that of the U.S. Yet China refuses to be one thing; it is both the world’s undisputed renewable energy leader even as it acknowledges the ongoing need for coal.

China may be adding renewables and EVs at a breakneck clip but it’s also planning to add new coal capacity at a pace equivalent to a new plant a week for years to come.

China already produces and uses more coal than the rest of the world combined and is now planning to add another 270 GW of coal capacity by 2025—more capacity than exists in any other nation. The entire existing U.S. coal fleet totals just 210 GW and falling.

To Beijing, this parallel renewable and coal buildout is not a contradiction but rather an energy and climate strategy borne out of perceived necessity and lessons learned from the global energy crisis, namely the missteps of the U.S. and Europe in managing the energy transition.

As Bloomberg observed, “China’s strategy is designed to avoid the pitfalls that have hobbled parts of the U.S. and Europe, which stopped investing in fossil fuel production and infrastructure before renewables were ready to take over. That’s led to an over-reliance on imports in some places, and in others a dependence on grids that can fall prey to the unreliability of sunshine and wind.”

President Xi Jinping recently laid out how China’s energy transition would differ from the West by following “the principle of building the new before discarding the old.”

China also views its investment in coal not just as a near-term bridge to the future but as a reliability backstop to manage the variability of renewable generation in the decades to come. According to experts, China is working on a market mechanism to compensate coal plants that sit idle when on backup duty to ensure their availability when needed. China’s renewable future is going to be built on a firm foundation provided by coal.

Recognizing the Need for a Course Correction

The contrast between the approach taken in China to the course charted in Europe and the U.S. couldn’t be starker. It’s hard to feel that the haphazard, even reckless, way the U.S. is approaching the energy transition is the right one. China has watched and learned while we continue to double down on our mistakes with predictable results. Soaring natural gas and electricity prices are driving the worst inflation in decades as grid reliability concerns emerge from one coast to the other. The Northeast is facing the shocking specter of rolling blackouts during the coldest days of this upcoming winter.

Just as we have embraced the need for industrial policy to compete on the global stage, particularly with China, we must also recognize where our energy markets are failing the national interest. A lack of a coherent energy policy is largely to blame. We seem incapable of asking and answering basic questions about our energy trajectory. Do we want to preserve affordable and reliable power as we build towards a cleaner future? The answer should be an obvious yes and we need to recognize the agency we have in achieving that goal. The tools – even something of a blueprint is there – if we choose to embrace them.

An important place to start is resisting the knee-jerk reaction of dismissing anything China does as the wrong approach—a too common stance in Washington that has left the U.S. scrambling to catch up in reshoring battery supply chains, solar panel and wind turbine manufacturing, as well as EV adoption, among a long list of other critical pieces of the global energy economy. Surely there’s something to the principle of “building the new before discarding the old.”

Our current approach – our de-facto energy policy – is a disaster of our own making. Doubling down on market-distorting tax credits for renewable power. Letting the U.S. Environmental Protection Agency (EPA) race ahead with a regulatory agenda designed to dismantle the remaining coal fleet despite the global energy crisis. Ignoring soaring electricity prices. Disregarding clear warnings from regulators and the nation’s Independent System Operators that the pace of the pivot threatens to wreck the reliability of the nation’s power supply. Where this path leads is no mystery.

The global climate fight is not going to be won or lost with the retirement timeline for the U.S. coal fleet. If China can build more new coal capacity in the next five years than our entire existing coal fleet to reinforce its energy security and grid reliability, surely we can embrace a little pragmatism. We must recognize the importance of the existing coal fleet to responsibly, affordably and reliably reach the energy mix of the future. 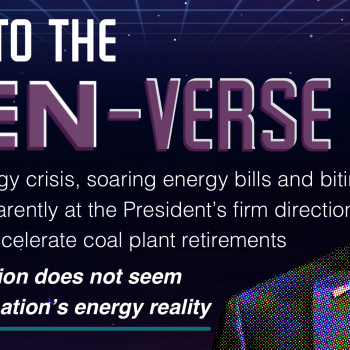