Last week, a federal judge made history – in a dreadful way – by reinstating an Obama-era moratorium on federal coal leasing. Setting aside the outrageous shattering of both judicial limits and established precedent, the meritless ruling comes at a remarkable time. The U.S. is facing an energy affordability crisis, a deepening grid reliability crisis, and the economy is bruised and battered from energy-driven inflation. Globally, ongoing supply shocks from the pandemic and turmoil from Russia’s invasion of Ukraine have energy markets in disarray.

As National Mining Association president and CEO Rich Nolan said in response to the ruling, “Americans need the energy affordability and energy security buttressed by coal production on federal lands and so do our allies struggling to transition away from Russian energy. The reimposition of this moratorium couldn’t come at a worse time.”

The original moratorium, put in place by then Secretary of the Interior Sally Jewel, began without any evaluation of its impacts on coal communities or energy reliability or affordability. Secretary Jewel announced a pause on coal leasing claiming certain aspects of the program needed evaluation. She could have conducted that review without taking the drastic step of halting coal leasing but instead chose to freeze a program that has been nothing but a remarkable success story for mining states, the American treasury, and American energy affordability and security.

Fortunately, reason prevailed and the Trump administration lifted the moratorium. The Biden administration has thus far declined to reinstate it, instead choosing to take comments on the program to inform its ultimate decision. Its review is ongoing.

Apparently tired of government’s policymaking process, the judge in this case made himself the self-appointed Secretary of the Interior, turning National Environmental Policy Act (NEPA) precedent on its head by reinstating the ban himself. The National Mining Association is going to appeal this ruling. The precedent potentially set by this case cannot stand, and, most importantly, the U.S. needs an active federal coal leasing program to navigate the ongoing global energy crisis. Secure, reliable and domestic energy supplies are critically important in this unprecedented moment. And, as global events have borne out, charting a path for our energy future cannot and should not mean leaving energy affordability and reliability behind.

A Blow to Mining States and U.S Energy Security

With more than 40% of U.S. coal production coming from federal lands, and with renewed interest in additional leasing, a functioning, stable federal coal leasing program is a must. It’s essential to our own energy affordability and energy security and it’s an overlooked but critical economic engine for mining states and communities.

The federal coal leasing program has delivered more than $9 billion in federal, state and local revenues over the last decade. Thirty-seven states consume coal from federal lands to generate electricity and fuel industrial and commercial facilities. The jobs and revenues from this production have lifted state and local economies across the West.

Coal wages are between 150% and 200% of the average wages across all sectors in states with federal coal production. Beyond the mines, federal coal production has created and sustained tens of thousands of high-wage jobs in other sectors including transportation, construction, equipment manufacturing, mining services and power generation. This is in addition to the revenues from federal royalties, bonus bids and surface rentals that are split between the federal and state governments.

Operations producing federal coal also pay a range of state and local taxes. The scope and amount vary by state, but they include severance or production taxes, sales taxes, real property taxes, personal property taxes and employment taxes. For example, in 2020, the financial contribution from federal coal to Wyoming state and local governments in the form of taxes, royalties and fees was over $550 million – revenues that underpin education and school construction as well as highway maintenance and other county and city infrastructure projects.

The federal coal leasing program works. The reimposition of a moratorium on leasing is a gross misinterpretation of the law and a clear danger to U.S energy affordability and security. 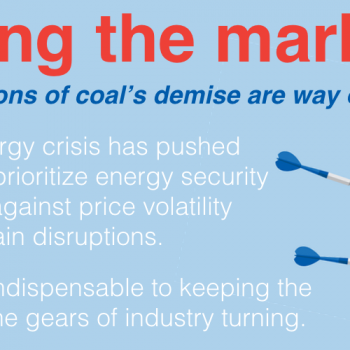