The global energy transition is feeling far more like global energy addition. Fossil fuels are having quite the moment. The Biden administration is lobbying OPEC to pump more oil and provide relief at the gas pump. Global natural gas prices are soaring, and coal prices and coal demand have jumped to record levels.

Energy and climate rhetoric seem to be increasingly detached from the ground truth of consumer demand. As reporting from Bloomberg recently surmised, “the [global] coal industry is booming. Prices are at a thirteen-year high as recovery from the pandemic revives power use around the world. China, which burns half the world’s coal, has been forced to try and cool the market. In the U.S., where coal has been on the retreat over the last decade, consumption is expected to rebound 16% this year. Even in Europe, coal use is inching up as demand stretches electricity grids.”

Coal demand the world over is on a tear. And while Asia is certainly the heart of consumption and new plant and mine development, there’s no question coal is having a resurgent summer in the U.S. as well. Struggling grids across the country are once again calling on coal to come to the rescue. According to Argus, in June, coal generation on the PJM grid hit a three-year high. Coal demand on the Midcontinent Independent System Operator (MISO) grid rose 37% in June and 42% in Southwest Power Pool (SPP) territory.

This summer’s rising coal generation in the U.S. underscores global reality: the security, reliability and affordability of coal won’t be easily replaced. Even in nations and on electricity grids that have actively worked to push coal aside – such as the U.S. – the remaining coal fleet continues to underpin efforts to keep the lights on and ACs running.

With inflation pushing up the cost of necessities of all kinds, the affordability provided by coal is helping check power prices on those grids that are lucky enough to still have significant coal capacity.

Coal-enabled fuel diversity is not only a reliability lifesaver during cold weather when natural gas infrastructure struggles to keep up (the MISO and SPP grids can attest to that), it’s a critical hedge to U.S. natural gas prices that are increasingly shaped by strong demand from the global market. LNG prices in Asia are now nearly four times the cost of benchmark natural gas prices in the U.S. It’s no surprise then that U.S. LNG exports keep notching records as new export capacity comes online.

Bridge to the Future

Coal’s fuel security, reliability and global ubiquity, coupled with U.S. natural gas’ increasing interconnection with global markets, raises some important questions—questions about whether the U.S. is doing enough to advance low-emission coal technologies but also about the wisdom of building new natural gas generating capacity as a bridge to the future.

The importance of dispatchable fuel diversity points to maintaining the existing coal fleet – not greater reliance on natural gas – as the bridge we need to get to the low-emission future we all want.

Despite rhetoric suggesting otherwise, the world is affirmatively not running away from coal, nor should we. The existing U.S. coal fleet provides the fuel security and balance the grid and consumers need to navigate the transition ahead. Recognizing coal’s global staying power also should be a wakeup call that meeting global emissions reduction targets requires doubling down on advanced coal technology, not abandoning it. This summer’s coal boom should be all the signal we need for a parallel boom in leadership on emissions control technologies. 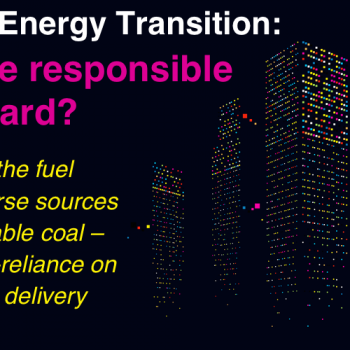