US Energy Reliability Gone With the Wind

US Energy Reliability Gone With the Wind

It is too often assumed that making maximum use of renewables is the answer to addressing environmental goals.  So easy is it to buy into this assumption that intermittent wind power is pulling ahead of coal in Texas.

Energy analysts forecast that wind turbines in Texas will generate about 87,000 megawatt-hours of electricity next year, eclipsing the anticipated output from coal.  Coal power is falling in Texas and nationally, while wind power is on a rapid upward climb.  Wind power already supplies 20% of the Lone Star state’s power and it’s expected to reach 24% in 2020, second only to natural gas, while coal plants continue to close.

If you think those trends don’t come with a downside, think again.  The economy in Texas and nationally demands full-time electricity.  Wind only generates part-time electricity.  In West Texas this summer, on some hot and humid days it was so still there wasn’t enough of a breeze to stir a leaf.  Hundreds of wind turbines stopped spinning.  When the Texas grid needed wind power the most, it was nowhere to be found. The Texas electric power grid came perilously close to collapsing.

Electricity prices spiked from their normal range of $20 to $30 per megawatt-hour to $9,000 not once but twice. The state teetered on the edge of rolling blackouts and no air conditioning for millions of families during triple digit temperatures. Operators of the Texas grid issued alert after alert asking consumers to turn off devices and conserve power.

Texas is unlikely to be the only state that comes perilously close to electricity shortages.  Federal and state subsidies have made wind and solar power so cheap that they are displacing essential baseload sources of power that are capable of running when needed. Nationally, electricity production from coal continues to decline, falling by 15% in 2019 and another 9% projected in 2020. The very power plants that have long underpinned grid reliability are being pushed aside for sources of power that jeopardize it.

All of this is ominous not only for Texas but also other parts of the country.  The rapid shift toward wind power is an opportunity for a reality check in the debate over the deployment of renewables, which benefit from federal tax credits and generous state mandates.

According to the Joint Congressional Committee on Taxation, wind and solar power will have received $36.5 billion in federal tax credits between 2016 and 2020.  It’s an imposing number but it doesn’t even touch the subsidies provided for solar and wind at the state level.State renewable portfolio standards that mandate ever-increasing amounts of wind and solar power have been just as disruptive to electricity markets and perhaps even more costly.

It brings into sharp focus the most urgent challenge: How will the United States scale back the use of fossil fuels, yet maintain an adequate energy supply?  Are renewables ready to fill the gap alone?  Can wind and solar power be advanced fast enough and of sufficient scale, given that energy consumption is expected to grow over the next 30 years.  For all the investment in wind and solar, despite all of the billions in subsidies, their limitations remain immense.  The United States and the rest of the world will continue to rely on traditional sources of power for decades as populations grow, economies expand and living standards rise.

The current path forward that ignores the need for a balanced mix of energy sources is a road to nowhere.

Instead of indifference, we need to regain our balance and encourage investment in advanced energy technology of all kinds – coal, natural gas, nuclear power, and renewables, along with improvements in energy efficiency – if we hope to avoid future havoc in electricity markets and ensure the availability of reliable and affordable power. 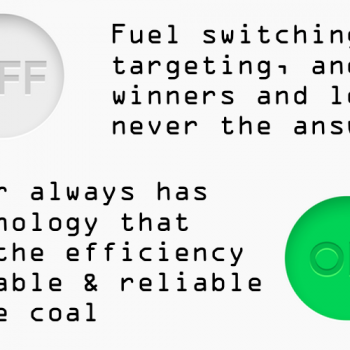