Sound the trumpets, it’s infrastructure week again. While it remains anyone’s guess whether or not a bipartisan compromise can be brokered for a deal, the urgency for action on the nation’s crumbling infrastructure is greater than ever.

The clock continues to tick. In 2017, the American Society for Civil Engineering released its most recent infrastructure report card. The grades were the kind you hide from your parents. The nation’s infrastructure received an overall grade of D+, the same grade it received four years earlier in 2013. While there were a few bright spots (the nation’s rail network received a B) the majority of our infrastructure is hanging on by a thread. Our roads, dams, levees and drinking water systems all received a D. For the wealthiest nation on earth, it’s a startling and unacceptable assessment.

Smart investment is needed to get us back on track, and there’s not a moment to lose. But rebuilding and modernizing is not only going to take dollars; it’s also going to require materials.

There’s an old adage that if you can’t grow it, you’ve got to mine it. And there’s no growing the materials that are the building blocks of our infrastructure. Fortunately, America’s mines can provide the iron for new bridges, copper for transmission lines, silver for water treatment plants and the countless other minerals and metals needed to return our infrastructure to world-class status.

American mines can also provide another key, and often overlooked, ingredient required for the rebuild – metallurgical coal. Met coal, as it’s called for short, is used to produce coke, an integral component in steel making. Met coal enables smelters to transform iron ore into iron to make steel. Every ton of steel produced requires 0.6 tons of metallurgical coal. Considering that the U.S. highway system alone has required about 6 billion tons of steel, met coal is inarguably essential to the U.S. and the world’s infrastructure. 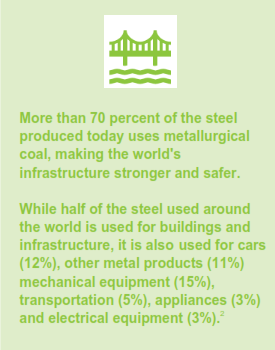 More than 70 percent of the steel produced globally is produced with met coal, and around 1 billion tons of metallurgical coal is used each year to feed the world’s voracious appetite for steel. Urbanization, particularly in emerging economies, is feeding that growing appetite. By 2050, steel demand is expected to be 1.5 times higher than it is today.

American met coal mines are helping meet demand for steel both at home and abroad. The U.S. has more than 175 metallurgical coal mines, directly employing more than 13,000 individuals, and new mines will be soon be added to that total. In February, Arch Coal announced the development of a new metallurgical coal mine in northern West Virginia. And Consol Energy Inc. just announced that it will be opening a new met mine in southern West Virginia in 2021.

U.S. mines have proven ready and capable to meet increased demand from overseas. The U.S. was the 2nd largest global exporter of met coal in 2017 with exports jumping 60 percent year-over-year. They were up again in 2018, rising another 19 percent.

U.S. coal is helping build the roads, bridges and dams of other nations’ infrastructure. Our met coal mines and their miners are ready and willing to provide the coal needed to rebuild and modernize our own infrastructure. Let’s hope this infrastructure week helps produce the compromise to give them a chance.