The U.S. Environmental Protection Agency (EPA) proposed to revise the New Source Performance Standards (NSPS) for greenhouse gas emissions from new, modified, and reconstructed fossil fuel-fired power plants. EPA is proposing, under Clean Air Act (CAA) section 111(b), to revise its determination of the best system of emission reduction (BSER) for these plants. This determination would replace EPA’s 2015 determination that partial carbon capture and storage (CCS) technology was the BSER for new coal units.

“Consistent with President Trump’s executive order promoting energy independence, EPA’s proposal would rescind excessive burdens on America’s energy providers and level the playing field so that new energy technologies can be a part of America’s future,” said EPA Acting Administrator Andrew Wheeler. “By replacing onerous regulations with high, yet achievable, standards, we can continue America’s historic energy production, keep energy prices affordable, and encourage new investments in cutting-edge technology that can then be exported around the world.”

“Today’s actions reflect our approach of defining new, clean coal standards by data and the latest technological information, not wishful thinking,” said EPA Assistant Administrator for the Office of Air and Radiation Bill Wehrum. “We take seriously our responsibility to protect public health and the environment in a manner consistent with the requirements of the Clean Air Act and will continue to do so. U.S. coal-fired power will be a part of our energy future and our revised standards will ensure that the emissions profiles of new plants continue to improve.”

This proposal will ensure that any new coal plants built in the United States use the most advanced, clean coal technologies that have been adequately demonstrated. The revised standard will be based on reality and comport with the requirements of the Clean Air Act. The previous administration sought to discourage new coal developments by requiring the use of unproven carbon capture and storage technologies that turned out to be economically prohibitive and limited geographically.  By revising the NSPS, EPA will protect the environment while helping to provide room for American energy production to continue to grow and diversify, which is critical for long-term energy security and global competitiveness goals. EPA projects this proposed rule will not result in any significant carbon dioxide emissions changes or costs.

After further analysis and review, EPA proposes to determine that the best system of emission reduction (BSER) for newly constructed coal-fired units is the most efficient demonstrated steam cycle in combination with best operating practices. This proposed BSER would replace the determination from the 2015 rule, which identified the BSER as partial CCS. The primary reason for this proposed revision is the high costs and limited geographic availability of CCS.

This proposal includes four distinct actions based on a revised BSER:

EPA is also taking comment whether and how to address concerns raised by stakeholders regarding the increased use of simple cycle aeroderivative turbines, including as back-up generation for wind and solar resources, whose operation may exceed the non-base load threshold described in the 2015 rule. Any follow-up regulatory actions would be achieved through a separate and subsequent regulatory proposal.

Finally, EPA is taking comment on the regulatory threshold under section 111(b) that a source category “causes, or contributes significantly to,” air pollution. EPA asks for the public’s views on the proper interpretation of this phrase, the agency’s historic approach to this requirement, and whether this requirement should apply differently in the context of greenhouse gases than for traditional pollutants.

EPA will take comment on the proposed Standards of Performance for Greenhouse Gas Emissions from New, Modified, and Reconstructed Stationary Sources: Electric Utility Generating Units, for 60 days after publication in the Federal Register and hold a public hearing. Details on the public hearing will be available shortly.

More information, including a pre-publication version of the Federal Register notice and a fact sheet, are available at: https://www.epa.gov/stationary-sources-air-pollution/proposal-nsps-ghg-emissions-new-modified-and-reconstructed-egus

Opinion: The Lights Could Go Out This Winter if We Close More Coal and Nuclear Power Plants

A Path Forward for High Efficiency, Low Emissions Coal Technology in the U.S 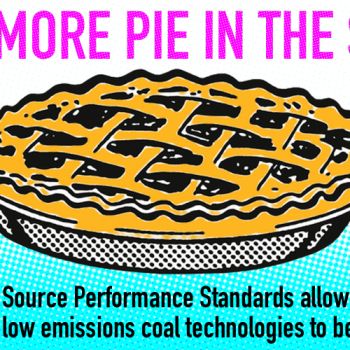