The Environmental Protection Agency officially put forward on Tuesday its proposal for replacing the Clean Power Plan, the heart of President Barack Obama’s efforts to curb greenhouse gases from the nation’s power plants.

But folded into the Trump administration’s latest rollback is a change to a permitting program little known outside of industries that have to contend with it, such as the power sector.

Under that program, called New Source Review, the EPA forces power plants to install pollution controls when they expand or upgrade facilities in ways that cause a notable uptick in total emissions of smog-forming pollutants.

But the Trump administration is suggesting a new standard for states to consider for triggering that requirement: Instead of total emissions determining whether an upgrade requires a permit in the program, the EPA said it wants to consider a plant’s hourly rate of emissions.

The result of that tweak: Coal-fired power plants can be refurbished more cheaply — and can run for years longer than they would have otherwise, contributing even more to climate change.

“This administration is blatantly picking winners and losers,” David Doniger, a climate and clean-air expert at the Natural Resources Defense Council, said in a conference call with reporters. “If this proposal becomes reality, the winner will be old coal plants.”

And because the pollution targeted by the New Source Review program is linked to lung and heart disease, the effect of the Trump administration’s plan extends beyond just warming the planet. The EPA projects that the entire proposal released Tuesday, called the Affordable Clean Energy rule, could lead to 470 to 1,400 premature deaths each year compared with the Obama-era rule due to particulate matter from power plants.

In its reasoning for restructuring the New Source Review program, the EPA took up a line of argument long made by electric utilities. When power plants make upgrades that let them run more efficiently or more reliably, their hours of operation increase, too. While such improvements allow power plants to emit less pollution on an hourly basis, because they are running for a longer time, they are emitting more pollution in total.

Under the current rules, that total increase triggers the expensive and time-consuming  process of complying with the New Source Review program that often makes such efficiency improvements not worth the headache.

“That has a lot of perverse implications because it means that if I want to improve the energy efficiency of a facility, which is something that is extraordinarily defendable from an environmental perspective, I will be dissuaded from doing so,” said Scott Segal, a partner at Bracewell LLP who represents utilities that run coal-fired plants.

Bill Wehrum, who runs the EPA’s air and radiation office, told reporters Tuesday that the proposed changes in the New Source Review program are meant to reconcile it with the broader changes the agency is making on carbon dioxide emissions.

“That provides a level of consistency that we haven’t had with the program before,” Wehrum said, adding that when it comes to the two programs, the changes to the New Source Review program allows it “so they operate in concert, rather than in conflict, with each other.”

But it is total, not hourly, pollution that matters when it comes to public health. “This means more pollution in the air over the course of a year without any control technology,” said Craig Oren, a law professor at Rutgers University and an expert on federal air-pollution laws. “That means there will be many more hours during the year in which the public and environment will be exposed to air pollution.”

The change may also cut into the competitive edge that relatively cheap sources of renewable energy, such as wind and solar power, have gained over coal. By allowing power plants to forgo the installation of new pollution controls when they upgrade or expand, the administration would “push out cleaner resources” from the electricity marketplace, according to the NRDC’s Doniger.

The declining coal-mining sector, central to President Trump’s political coalition, hailed the change as a boon to their businesses. Hal Quinn, president and chief executive of the National Mining Association, said in an interview Monday that he appreciated that the administration had looked at “what things can be done that’s proved to be a deterrent for plants upgrading their systems.”

The current system, he said, was “so uncertain and counterintuitive” that it discouraged some utilities from making existing plants more efficient.

Asked about the fact that these plants would emit more traditional pollutants if they were allowed to run longer, he said, “Anything that’s going to be more competitive to run is going to have more emissions.”

During a rally in Charleston, W.Va. on Tuesday evening, President Trump emphasized what his administration is doing to lift the coal business from its decline, despite the economic headwinds it face.

“We are back,” Trump told the crowd. “The coal industry is back.”

The changes to New Source Review apply only to power plants — for now. Segal said that “it would make good sense” for other businesses subject to the program, like manufacturers, to seek a similar policy change from the administration themselves.

From Illegal Overreach to Thoughtful Restraint 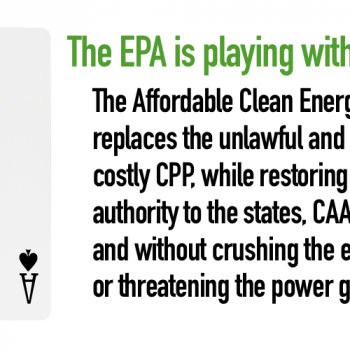