Coal’s much-publicized decline isn’t a decline at all. Coal plant retirements in the U.S. and some parts of Europe have created a narrative that coal is in irreversible global retreat. The data tell a different story.

The oil and gas giant BP’s recently released annual Statistical Review of World Energy offers an important reality check on global energy use. BP’s chief economist, Spencer Dale, took a step back from the noise of yearly data to examine how the world’s mix of electricity generation has changed over the past 20 years. What he found might surprise you. It surprised him. 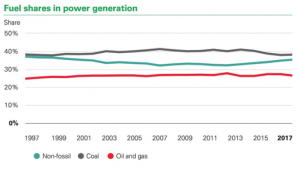 Global power consumption has soared over the past 20 years. For coal’s share of electricity generation to have held steady means that worldwide production and use of coal has grown – and grown significantly at that.

The surprise isn’t just limited to what has happened but also to what is happening. As the Financial Times’s Ed Crooks reported last week, coal consumption may be falling in the U.S. and Europe, and perhaps even in China, but overall its still growing.

Crooks singles out Vietnam for good reason. Vietnam is pursuing renewable power to help meet its growing energy needs, but wind and solar are but a small part of the nation’s energy strategy. Coal – reliable, affordable and, thanks to advanced technology, increasingly clean – is the centerpiece of its plan to industrialize. Secure, on-demand, baseload power is what Vietnam needs to fuel its economy.

As Benjamin Sporton of the World Coal Association points out in Crooks story, many of the plants under construction in Asia are high efficiency, low-emissions (HELE). These ultra-efficient power plants are helping meet energy demand and address environmental concerns.

As we’ve discussed before, commercially available HELE technology – now being deployed all over the world – could be used to upgrade our coal fleet and help ensure we maintain a balanced, secure energy mix. But misguided politics and an energy marketplace unable to properly value fuel diversity and the reliability of baseload coal plants, remain steep hurdles.

The U.S. possesses the world’s largest coal reserves and the world’s greatest capacity for technological innovation. Instead of fighting our resource abundance, we should be leading global efforts to develop and deploy advanced coal technologies. Our energy security, our economy and the world’s environmental goals might well depend on it.