Anyone notice that this past winter was particularly cold in the eastern United States? Plenty of families in the Northeast certainly did, and they turned up their thermostats for weeks at a time to stay warm.

Now, a new report from the U.S. Department of Energy reveals a surprising fact about the performance of America’s power grid during the coldest parts of the recent winter: As households reached for the thermostat, it was coal-fired power plants that saved the day. In many parts of the country, these reliable plants stepped up to cover 55 percent of incremental daily power generation. And so, when families most needed to warm their homes, it was old king coal—not natural gas or wind turbines—that made it possible.

How did coal end up shouldering so much of the burden of keeping America’s lights and heat on this winter? According to the DOE report , coal is still crucial for meeting America’s baseload power needs. In part, that’s because coal plants have the unique ability to store fuel on-site. They don’t depend on real-time pipeline delivery, like natural gas plants do. And they aren’t beholden to the vagaries of weather, like wind turbines. The DOE report found that coal provided the “most resilient form of generation due to available reserve capacity and on-site fuel availability, far exceeding all other sources.” In fact, during the January cold snap, coal provided three times the incremental power generation of natural gas.
|
“The idea that we can take a critical generation source like coal offline doesn’t make sense and is, in fact, a fantasy,” said DOE Assistant Secretary Steve Winberg.

So what to do about coal, then? No doubt there have been calls to dismantle America’s coal fleet and dive headlong into renewables like wind and solar power, plus increased natural gas generation. But it doesn’t appear that America’s power grid is remotely ready for such a possibility. In fact, one DOE analyst cautioned that “removing coal from the energy mix would worsen threats to the electrical grid’s dependability during future severe weather events.”

The problem is that coal power plants are being retired, yet America’s energy demand is growing. That prompts some experts to suggest another option — upgrading America’s coal fleet to include the high-efficiency, low-emission, or HELE, technologies that are now being installed in modern coal plants around the world. Most Americans seem to agree. According to a new poll , 73 percent of voters believe the U.S. should prioritize the use of these technologies.

Whether HELE technologies are employed in the U.S. or not, 55 percent of voters say Washington should take action to upgrade existing coal and nuclear plants to preserve the diversity of fuels that power our grid. Today, coal and nuclear power account for 50 percent of U.S. electricity generation. That’s a major lift to accomplish every day. Yet the average coal plant is 39 years old and the average nuclear facility is 36 years old. These plants are ready for upgrades that could make them more efficient, and, in the case of coal, the upgrades could further reduce emissions.

It’s time to modernize America’s coal fleet—whether through the use of HELE technologies or other advanced coal technologies. Right now, the U.S. is home to just one “ultra-supercritical” coal plant—considered the gold standard for emissions reduction. In contrast, China maintains 90 of them. Ultra-supercritical plants are able to generate far greater thermal efficiencies—which leads to significant reductions in emissions. It’s ironic that the U.S. should look to China on this front, but Chinese companies are now building new coal-fired plants that are among the cleanest in the world.

As the recent tough winter has demonstrated, coal is still an essential part of America’s power grid. And that’s all the more reason to bring 21st Century technology to bear on meeting the nation’s growing power needs. 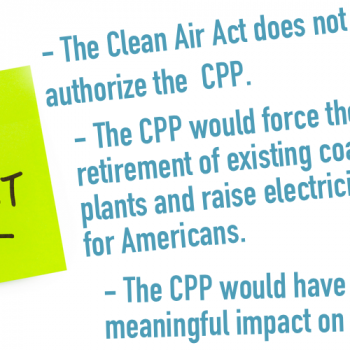 The War on Coal is Winding Down Slowly