Against the backdrop of war in Ukraine, U.S. coal shipments to Europe are playing a quiet yet critical role in keeping the lights on from Rome to Amsterdam. If the shipments continue through the winter — and are ramped to replace the loss of Russian fuel — they will save millions of people from freezing in the dark.

Although the U.S. has been supplying Europe with more gas, principally LNG, its cost has soared and not nearly enough LNG can be produced in the U.S. in the near term to meet Europe’s needs. So U.S. coal is serving as a replacement fuel, saving Europe from potentially severe electricity and heating shortages, while enabling our allies to achieve a modicum of energy independence.

Coal, because it is cheap and abundant, is a great boon for energy-strapped Europe. U.S. coal exports to Europe rose more than 140 percent in May compared to a year earlier — and they are continuing at that increased level, because Europe desperately needs coal for electricity generation to supplant Russian gas that stopped flowing due to sanctions against Russia for its unprovoked invasion of Ukraine. By October, however, U.S. coal shipments will need to grow much higher than they already are so that enough fuel will be available before winter sets in.

That’s because U.S. coal is the best way out of Europe’s energy bind. By accelerating coal shipments to Europe, we can address two serious problems at once: the risk of a continent-wide electricity shortage, and Europe’s yearning for energy independence from Russia.

American voters strongly support such an effort. A national poll shows that six in 10 voters agreed the U.S. should ramp up domestic coal production to help our European allies break away from reliance on Russian fuels.

Something else: Europeans are recognizing that a successful transition to a renewable energy future can’t happen without baseload power. Output from Europe’s coal and nuclear plants — the energy infrastructure that should have been used all along for the transition — is precisely the bridge to get where Europe needs to go.

The question isn’t whether Europe needs more power, but what energy mix will prevent electricity shortages of the kind Germany experienced several years ago when it abandoned base load nuclear and coal power in the mistaken belief that renewables and natural gas alone could meet its needs. They couldn’t, and Germans suffered the consequences.

It’s no surprise that Germany, having learned its lesson about intermittent wind and solar power, is now building coal plants. And despite goals they adopted to reduce greenhouse-gas emissions, no fewer than eight European countries, including France and Great Britain, are preparing to restart coal plants to replace Russian gas and meet increasing demand for electricity.

Does this mean that European governments don’t care about the environment? No. It means that governments can’t count on public support to advance the carbon-reduction process if there’s an energy shortage.

To understand the dimensions of the task facing Europe and the U.S., you must consider that the International Energy Agency projects that global energy demand will increase about 50 percent by 2050.

The Greens, however well-intentioned in their quest to increase the use of solar and wind energy, ignore a fundamental principle of electricity production: Instead of being discounted, baseload power must be the fulcrum by which countries on both sides of the Atlantic move ahead in ensuring energy reliability, while increasing the use of renewables. The mechanism for achieving this is already in place. Here in the U.S., baseload electricity from nuclear power, gas and coal will provide most of our nation’s energy supplies well into the future. And, no thanks to decades of Russian interference, Europe is making up its own mind about how it wants to proceed. 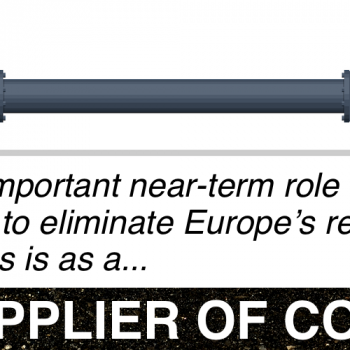