California and Texas Blackouts Could Be Coming, Energy Experts Warn

California and Texas Blackouts Could Be Coming, Energy Experts Warn

It could be a cruel summer for millions of Americans who are not only paying big energy bills but also worried the AC will conk out.

That is because energy experts warn, several regions face potential blackouts and much higher utility bills. The Midwest electric grid has “a high risk” of failure according to the North American Electricity Reliability Corporation (NERC) in its Summer Reliability Assessment report. The report also warns the West Coast, and Texas could have blackouts while rates skyrocket.

In mid-June, utility power providers were warning that hot weather could lead to “capacity problems on the grid.”

Part of the problem, said John Moura, NERC Director of Reliability Assessments and System Analysis, is the rapid remaking of the nation’s electrical grid will pose challenges to grid reliability over the next decade. Recent blackouts in California and Texas, “should serve as a wake-up call for the rest of the country,” Moura said.

Americans are waking up to the problem, said another energy group.

A poll by The National Mining Association (NMA) found about 8 in 10 voters–including a majority of Democrats, Republicans, and independents–want the government to prevent premature closings of functioning power plants until replacement generating capacity is online. The poll found that 9 in 10 voters are concerned about rising electricity rates.

Voters were also asked if the U.S. should ramp up coal production to ease Europe’s dependence on Russian coal for steelmaking and electricity generation. Some 60 percent want greater U.S. coal production, the poll noted.

“Americans are deeply concerned that they are paying far more for a supply of electricity that is less reliable than ever before. With grid reliability deteriorating, energy inflation soaring and the threat of blackouts now a reality for tens of millions of Americans, it’s time for an energy policy reset,” said NMA President and CEO Rich Nolan.

“The rise in electricity prices is, unfortunately, much too predictable considering the energy policies of the past two Democratic administrations promised–and have since delivered–Americans. Between Presidents Barack Obama and Joe Biden, they have forced the shuttering of power plants across the country, made the siting and construction of transmission lines virtually impossible, stopped pipeline expansion, and closed off domestic energy production,” argues Craig Stevens, a spokesman for the group “Grow America’s Infrastructure Now.”

A spokesman for the U.S. Department of Energy did not respond to repeated requests for comment.

Besides energy availability, price is also a problem, a regulator noted.

The Federal Energy Regulatory Commission says electricity prices for June through September in the California, New England, and Texas markets rose 77 percent to 223 percent from last year’s prices. Those numbers came from the U.S. Energy Information Administration (EIA). In its latest “Short Term Energy Outlook” issue, it forecasts electricity prices in the Northeast regions will double. They will exceed $100 per megawatt-hour between June and August. That is up from an average of about $50/MWh last summer.

EIA pointed to the high price of natural gas as a cause of price hikes, as well as constraints on fuel switching to coal from “continued coal capacity retirements, constraints in fuel delivery to coal plants and lower than average stocks at coal plants. New England is feeling the heat of higher prices.

Is there a solution?

NMA spokesman Conor Bernstein said while there is no immediate answer, long-term national policy should be to use domestic energy resources.

“Getting us to our energy future shouldn’t mean disassembling affordability and reliability along the way,” Bernstein contends. “This global energy crisis has underscored the need for U.S. energy leadership and, as this polling clearly shows, Americans recognize the critically important role American coal can play in reinforcing our energy security and that of our allies and they want their elected officials to take action.”

Bernstein also blamed the EPA. “It wants to use every tool in its toolbox to accelerate coal plant retirements. That’s an agenda, that will only exacerbate the reliability and affordability challenges already gripping the country. Doubling down on that approach is insanity.”

An electricity crisis of our own making

Reining in the EPA 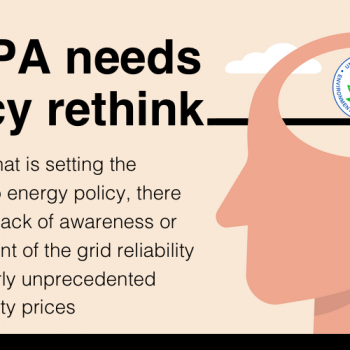