Does America Have a Secret Energy Source? Yes, It’s Coal

Does America Have a Secret Energy Source? Yes, It’s Coal

The quick rise in the price of natural gas to levels not seen since 2008 has made one thing clear: The idea that gas was an economical bridge to a renewable energy future was flawed.

The price of natural gas, which accounts for about 40% of electricity used by Americans and half of home-heating needs, has more than doubled this year and is expected to remain high in the aftermath of Russia’s invasion of Ukraine and its curtailment of gas exports to Poland and Bulgaria.

The U.S. natural gas glut that once defined the shale era is gone. Come next year, fully 20% of U.S. gas production is expected to be exported.  High overseas prices are now inflating the price of gas here at home. However, an energy friendly administration could reverse the U. S. natural gas supply problem which could lower its price.

This adds up to a very different outlook from a few years ago, when natural gas was in such ample supply that its price had tanked.  While shale gas producers are starting to ramp up drilling, they’re struggling to meet high demand and price relief remains distant.

With energy-driven inflation a stubborn problem, this new surge in gas prices couldn’t come at a worse time. The addition of renewable power to temper gas demand will help but it’s hardly a cure-all. Wind and solar power are already the fastest growing sources of power but together they still only meet roughly 13% of U.S. power demand and are not reliable sources of electricity. Also building the transmission infrastructure needed to connect them to urban centers from the sunniest and windiest regions of the country remains an enormous challenge. Opposition to new interstate power lines is such a problem transmission additions have actually decreased when experts tell us they need to increase significantly.

Ensuring that energy inflation doesn’t get far worse is going to require an energy policy reset that gets the U.S. Environmental Protection Agency’s (EPA) agenda in line with energy pragmatism. It may seem anathema to the Biden administration’s climate goals but it’s time to reevaluate the importance of the coal fleet and put EPA’s daggers away.

The best hedge consumers have against high natural gas prices is the coal fleet that continues to meet 20% of U.S. power demand — and double that in some regions of the country. These plants provide security to the grid and offer choices in fuel use.

When gas prices soar – as they are now – coal generation rises, shielding rate payers from higher power costs. Unfortunately, much of the coal fleet is facing a renewed regulatory push that could see it disappear just when it’s needed most. Half the coal fleet that existed a decade ago is gone and utilities have already scheduled the closure of dozens of more plants. In some regions coal plants are closing sooner than anticipated and complicating electricity reliability.  Several regional transmission organizations forecast very tight electricity supplies this summer. There is an increased probability of forced blackouts.

EPA has signaled it’s about to use every tool at its disposal to accelerate coal plant closures. That’s a mistake policymakers must make sure doesn’t happen. We should be able to do things in an intelligent way. A pragmatic energy approach accelerates renewable energy deployment while also ensuring the coal fleet remains a near-term buffer against soaring natural gas prices.

Coal capacity is also playing an unheralded but critical role in preserving grid reliability when renewable generation has faltered. Blackouts have hit California and Texas in recent years and the grid operator for the Midwest is now warning that some states could see rolling blackouts this year for lack of enough generating capacity.

The bridge we need to our energy future is a balanced electricity mix that values coal, natural gas, nuclear power and renewables as all playing an important part on the energy path forward. Soaring natural gas prices and the pain of energy-driven inflation call for energy pragmatism. Now’s the time to recognize the role the coal fleet should play in it.

The Transition to Crisis 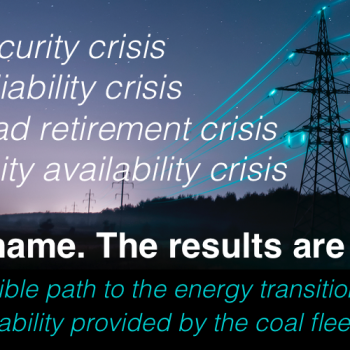