Via The Salem News:

There are two reasons why consumers experience a power outage. The first is obvious: a storm comes along and knocks down trees and power lines. That’s what typically happens. But there’s now a second reason for power outages in the United States–there simply isn’t enough electricity to go around.

Power generation in the United States has always been an extremely dependable commodity. But recently, there’s been a startling decline–and both Texas and California have offered previews of this worrying trend. In February 2021, portions of Texas’s natural gas infrastructure and wind turbines froze, leaving utilities without sufficient fuel and generating capacity to meet demand. The ensuing blackouts claimed more than 200 lives.

In California, the challenge over the past two years has been rolling power outages. It’s an increasingly regular occurrence on hot days.

Power grid regulators have been warning that California’s and Texas’ troubles are only a preview of a brewing national grid-reliability crisis. It appears they’re right. Mismanagement of America’s transition to renewable energy is leaving entire regions of the country short of on-demand power generating capacity when it’s needed most.

Why this stunning increase? MISO President Clair Moeller explained that some utilities simply don’t “have sufficient generation to cover their load plus their required reserves.” That has left them scrambling to obtain back-up power at nearly any cost. Moeller cautions that these states could see an “increased risk of temporary, controlled outages to maintain system reliability.” In other words, get ready for blackouts.

In recent years, America’s electricity supply has endured what one industry analyst described as a “slew of coal and nuclear retirements.” That has translated to the loss of a large chunk of reliable electricity production across the nation.

Wind and solar power are currently being added to regional grids. But they only provide power when the weather cooperates. Adding this renewable capacity looks good on paper. But reliable, on-demand capacity from coal and nuclear is being eroded at the same time. During peak demand on a bitter cold, windless day–or on a scorching summer night–there may not be enough power to go around.

This is a situation poised to go from bad to worse. Utilities are now begging for reliable power generation. But America’s coal plants are being pushed into early retirement by regulatory pressures. That means environmental regulation is out-of-sync with the alarming facts on the ground.

Any transition to renewable energy must be managed in ways that don’t impose soaring costs on consumers–or sacrifice reliable power delivery. Natural gas prices have doubled in the past year, and the challenge of matching power supply with the limits of renewable energy remains an ongoing challenge. We need to rethink the role existing coal plants can play in getting us to our energy future.

Instead of dismantling our existing generating capacity, let’s build on its shoulders. Rolling blackouts or complete grid failures due to faulty planning are unacceptable. It’s past time for a responsible energy policy, not a reliability crisis.

Terry Jarrett is an energy attorney and consultant who has served on both the board of the National Association of Regulatory Utility Commissioners and the Missouri Public Service Commission.

Does America Have a Secret Energy Source? Yes, It's Coal

As Natural Gas Prices Soar, a Plea for Energy Pragmatism 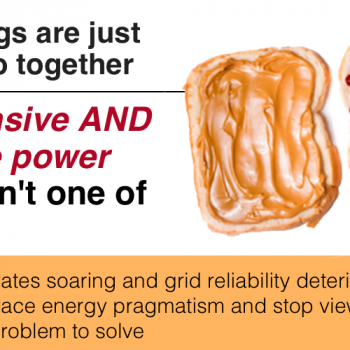