A new consensus is building that electricity grid reliability problems are in fact very real and very serious. That may not be news to anyone who has been paying attention. There have been countless warnings that something is very wrong but, for years, many of the warnings and some of the loudest voices making them were simply dismissed as obstacles in the way of progress.

Today, the voices, data and warnings are undeniable and unified in their message: if we keep pretending there isn’t a problem the consequences will be severe.

At the heart of the issue is the energy transition and the pressure to close existing fossil fuel capacity – namely coal capacity – far faster than reliable alternatives are coming online. As new reporting from The Wall Street Journal explains, “the pace of change, hastened by market forces and long-term efforts to reduce carbon emissions, has raised concerns that power plants will retire more quickly than they can be replaced, creating new strain on the grid at a time when other factors are converging to weaken it.”

Supporting that conclusion is a seemingly endless string of warnings and reports from nearly every corner of the country. Grid operators like ISO New England, NYISO and MISO are all deeply concerned by mounting fuel security and reliability challenges. ERCOT in Texas and CAISO in California are desperately trying to avoid another round of disasters. Utilities and regulators, most notably the North American Electricity Reliability Corporation (NERC), which oversees the reliability of the grid, are all singing from the same sheet of music.

In fact, NERC concluded 2021 with a grim warning in its long-term reliability assessment: capacity retirements and the rapid remaking of the grid are already posing tremendous challenges to reliability that will get much worse over the next decade. NERC’s Director of Reliability Assessments and System Analysis said the energy disruptions seen in California and Texas over the past year “should serve as a wake-up call for the rest of the country.”

One of the reasons the situation is deteriorating so rapidly is because replacement capacity and infrastructure isn’t materializing. Consider what is happening in New York. NYISO is so concerned about its eroding reserve margins that it’s already warning that the right weather conditions, like a sustained heat wave, could result in rolling blackouts in New York City by next year.

NYISO’s own reliability assessment warned that, “the system may cross a reliability ‘tipping point’ in future years…” Avoiding that tipping point, according to the grid operator, is going to take a nearly implausible threading of the needle of on-the-ground deployment. For example, just one of the four key risk factors for maintaining reliability includes, “the timely completion of planned transmission projects.” According to NYISO, “If the planned projects were delayed for any reason, the grid’s ability to reliably serve customer demand would be jeopardized.” Just last week, environmental groups – of all people – came out in staunch opposition to one of those critical transmission lines.

Even in the places with the most ardent support for decarbonization, opposition to building renewable capacity and transmission infrastructure is leaving utilities and grid operators with dwindling options.

“I’m really worried about how difficult we’ve made it in New England to build anything,” said Cheryl LaFleur, a former member of the Federal Energy Regulatory Commission who now chairs ISO New England’s board of directors. “If we’re going to use more renewables, we actually have to site them and build them….”

The clock is ticking. New England – just like the rest of the country – is about to see demand for power begin to soar, driven by the electric vehicle revolution. ISO New England predicts the region’s demand for power could double by 2050. In Texas – home to February 2021’s catastrophic grid collapse – power demand is already surging.

Curt Morgan, CEO of Vistra Corp., which operates the nation’s largest fleet of merchant power plants and has a considerable footprint in Texas, told The Wall Street Journal, “Everything is tied to having electricity, and yet we’re not focusing on the reliability of the grid. That’s absurd, and that’s frightening. There’s such an emotional drive to get where we want to get on climate change, which I understand, but we can’t throw out the idea of having a reliable grid.”

Reliability challenges are now impossible to ignore yet de-facto state and federal energy policy is accelerating plant closures when it’s clear just the opposite is needed to navigate the transition ahead. Instead of taking apart the existing capacity and fuel security that can help manage the deeply complex challenges of the transition, we need leadership to ensure that invaluable insurance policy is here to stay for the foreseeable future.  As the National Mining Association’s president and CEO, Rich Nolan, said following the release of NERC’s alarming long-term reliability assessment, “responsibly managing the energy transition should mean building on the shoulders of the existing coal fleet, not in place of it.” 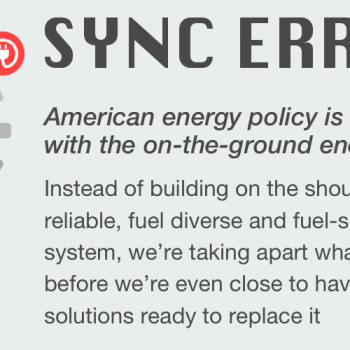 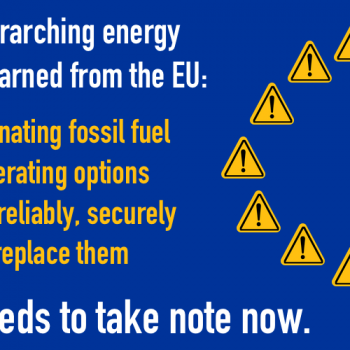