Proposing to upend the nation’s electricity mix and do it at warp speed is policy that at the very least deserves transparent discussion and requires extensive planning. Tucked into the reconciliation package is just such a proposal. The Clean Electricity Payment Program will throw vast sums at utilities to transform their generating fleets and do so in less than a decade. It is – as The Wall Street Journal editorial board recently described – “a national renewable-energy mandate on the sly.”

The ramifications of this plan for consumers and the grid, particularly grid reliability, could be extraordinary. But despite the sweeping changes such a plan could bring to the nation’s power sector and every dimension of our economy, there will be almost no debate. The partisan nature of the reconciliation process doesn’t allow for it.

Open debate and constructive exchanges about how such a plan could or should proceed would include a frank discussion about cautionary tales from Texas to California about missteps in the energy transition. These examples of poor planning, overconfidence in modelling, and failure to value fuel diversity and security should scream out for caution. Anyone unconvinced of the potential danger this proposed rapid transformation may bring need only look across the Atlantic.

Europe’s attempted pivot away from traditional sources of power to heavily subsidized renewable energy, and overreliance on natural gas as a bridge fuel, is spiraling towards economic catastrophe.

“We face an extreme situation”

In Germany, where the Energiewende has already come with a litany of problems, the mandated retirement of the nation’s coal fleet is adding acute grid reliability challenges on top of stunning costs. Germany’s ability to meet peak power is rapidly eroding and poised to hit a crisis point in the next two years.

As reporting from Bloomberg recently detailed, Chancellor Angela Merkel has admitted that her government has not managed the transition well. “Power demand will probably increase more than official forecasts by the end of the decade, she said in June... But the crunch could come much earlier. By 2023, the margin of supply over peak demand is expected to plunge to 3 percent, or two gigawatts, from 26 percent before the pandemic.”

A razor thin supply of power is likely to send power prices in Germany soaring. Wholesale rates have already jumped 60 percent this year, a premium that is trickling down to German consumers who already shoulder the highest electricity rates in Europe. The pain is only poised to get worse. German power futures for the fourth quarter are trading at twice the rate of last year.

Germany’s sky-high energy prices are becoming a continent-wide phenomenon. Bloomberg found that, “Spain was already forced to cut energy taxes as power prices rose to a record, and the U.K. is expected to allow utilities to increase bills a second time this year….” In Spain, electricity prices have surged to more than double what they were just two years ago before the pandemic shaved demand.

The wheels on Europe’s rapid energy transition are threatening to come flying off if energy prices continue to rise and reliability challenges continue to mount. This winter – when energy demand spikes during bitter cold – it’s anyone’s guess if supply will keep up. There’s growing concern from utilities that sky-high natural gas prices and low gas storage could mean severely constrained supplies. Harald Herzig, head of trading at German utility Mainova, recently warned, “We face an extreme situation this winter with the threat of really not having enough gas for the Western European markets.”

The warning signs for American policymakers are everywhere and yet don’t seem be heeded anywhere. Now, more than ever, energy policy is in desperate need of careful planning, of measured design and thoughtful debate. Racing ahead with policy that undercuts grid reliability while driving up energy costs is simply the wrong way to navigate the road ahead. The evidence at home – and abroad – couldn’t be clearer. 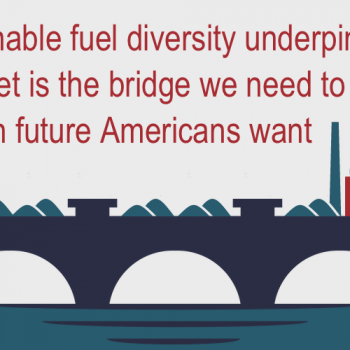