Americans have seen some troubling incidents throughout the U.S. power grid in recent years. Last February, Texas suffered dangerous power outages during a lengthy polar vortex. And summer heatwaves have pushed California into rolling blackouts and other emergency measures. This is what happens when extreme weather drives electricity demand beyond available power supplies. Typically, these breaking points come in the peak moments of summer and winter. But could similar power crunches start to emerge during the relatively mild conditions of spring and fall?

It used to be that the spring and fall seasons provided a respite for utilities. These “shoulder months” allowed for planned maintenance outages to refurbish systems and make upgrades. That usually wasn’t a problem because overall demand was manageable—leaving utilities with a helpful safety margin.

However, America’s power grid has undergone a significant shift in recent years. Baseload power generation from coal and nuclear plants has been steadily replaced by intermittent wind and solar systems. Now that this baseload capacity has been reduced, maintenance outages are becoming a trickier proposition. An unexpected heatwave or cold snap could suddenly raise demand. But if wind conditions don’t blow the way utilities expect, for example, grid supplies could tighten, leaving operators scrambling to make up the difference. If this were to happen during a maintenance outage, utilities would be forced to “shed load”—and initiate rolling blackouts.

Such fluctuations are now becoming a genuine part of the power grid calculation. Europe saw this firsthand recently when wind conditions failed in the North Sea. The resulting drop-off in wind-driven electricity production in the U.K. quickly hit regional energy markets—requiring backup from gas and coal-fired power plants. As a result, energy prices in Europe soared. In fact, tight supplies led to record-high natural gas prices, with the U.K. hit hardest due to its increased reliance on wind farms. And even though British utilities were forced to rely on backup power from coal plants, the entire U.K. coal fleet is scheduled for retirement by 2024.

In the U.S., California is now phasing out nuclear power while transitioning to natural gas, wind, and solar generation. As a result, California has become the nation’s largest net importer of electricity, even though it’s also the fourth-largest electricity producer in the country.

As for Texas, the Lone Star State has ramped up its quotient of wind farms in recent years while also shedding much of the coal-fired power that once anchored its grid. In fact, when the Texas power grid nearly collapsed last February, the state spent more than $46 billion buying electricity in a single week—five times what it spent on electricity in all of 2020.

The question is whether utilities can still conduct planned outages and maintenance during the spring and fall. While coal and nuclear once stood as a ready backup during these shortfalls, their “dispatchable” availability has grown more scarce, leaving utilities with an increasingly small safety margin.

These aren’t theoretical concerns. The Midcontinent Independent System Operator (MISO), which oversees electric power in 15 states, reported in September 2018 that “emergency conditions have become increasingly common, often during the shoulder months.” In such instances, MISO has been forced to “rely on emergency procedures to ensure reliable operation of the system.”

Similarly, the North American Electric Reliability Corporation (NERC), which oversees the reliability of the nation’s power grid, is now warning that capacity shortfalls are “almost inevitable.” And Sen. Joe Manchin (D-WV) recently told ‘Meet the Press’ that the proposed Clean Electricity Performance Program (CEPP)—which includes $150 billion toward a renewable energy transition—could mean that by 2030 “we are not going to have reliability.”

Policymakers should take note since the pace of America’s energy transition may be racing ahead of practicality. Adding more wind and solar to the nation’s power grid while failing to account for needed baseload generation presents a significant challenge. But even the historically “safe” shoulder months required to maintain and repair America’s power grid could face unexpected challenges. It’s time for policymakers to note these troubling lessons—and place greater emphasis on reliability and security throughout the nation’s power grid.

Dropping a Bomb on Electricity Affordability and Reliability 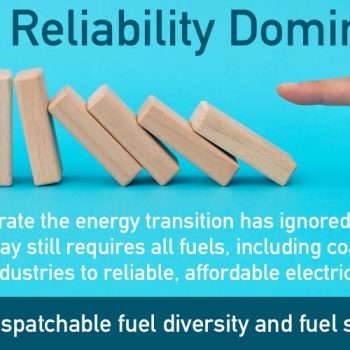