Grid reliability challenges this summer – from California and the Pacific Northwest to New York – are a clear signal we must better value the insurance provided by a balanced generation mix. But scorching heat aside, February’s catastrophe in Texas, that left 70% of the state without power, continues to sound some of the loudest alarms about overreliance on any one dispatchable fuel source and just in-time fuel delivery.

To be clear: no fuel or generating source came through the Texas freeze unscathed.  But detailed analysis of what went wrong and when it went wrong has increasingly pointed to the natural gas system as an area for deep concern. And perhaps most concerning of all, if the supersized gas system in Texas can fail – the oil and gas capital of the United States – what does it mean for other regions of the country? And how should we be thinking about policy to buttress the affordability, reliability and the resiliency of our energy delivery system in the years ahead?

A postmortem analysis from research group Bloomberg New Energy Finance (BNEF) found that well before the power went out in Texas, the natural gas delivery system faltered. That analysis concluded that, “as the cold weather swept through west Texas, the state’s gas production tumbled by some 11 billion cubic feet over nine straight days… Crucially, 52% of the drop in volume came before ERCOT’s (the Electric Reliability Council of Texas) first power cut in the early hours of Feb. 15.” In short, the gas system’s unraveling began days before the lights went out.

BNEF’s analysis was backed up by ERCOT itself which found that while there were multiple parts of the energy delivery system to blame for the crisis, the single largest point of failure was the gas delivery system.

The Wall Street Journal concluded, “the failure of Texas’ gas infrastructure to deliver the expected amounts of supplies exposed a dangerous vulnerability for a fuel the oil industry claims is more reliable than rival sources.”

Much of that vulnerability is due to a lack of winterization of the gas delivery system and a lack of authority from regulators to do anything about it. North American Electric Reliability Corporation President and CEO Jim Robb testified to the U.S Senate this spring that, “The area that Congress should reflect on, and potentially take action, is to think about how [weatherization] extends into the natural gas and fuel sectors. Because having a great winterized plant with no fuel in front of it isn’t very valuable. And that’s where our authorities right now stop.”

Despite abundant evidence that the gas system is in desperate need of binding winterization standards, the key vulnerability to the Texas energy system – one that likely stretches across much of the country – remains untouched.

A Windfall and Astronomical Bills

Amazingly, if February was a reliability blackeye for the gas industry, it was also a stunning windfall.

Bloomberg reported that, “As the flow of gas cratered, everyone scrambled to secure enough supply, sparking one of the wildest price surges in history. Power producers were forced to pay top dollar in the spot market for whatever gas they could find. Soon customers will be saddled with the bill. And it’s a big one: The total comes to about $11.1 billion for a storm that lasted for just five days….”

The crisis and the astronomical bills weren’t confined to just Texas. The Wall Street Journal found that, “states from Minnesota to Kansas are having to help local utilities, businesses and homeowners cover February bills after natural-gas prices surged from around $2 per million British thermal units to as much as $1,200 in parts of the country.”

Consumers were left with bills dozens or even hundreds of times their normal amount. In Oklahoma City, for example, a single senior living center received a February gas bill of $44,527—about 50 times more than the previous month.

Tiny Denison, Kansas has been pushed to the brink of insolvency. Reporting from Pew found that, “Denison has fewer than 200 residents, and in a typical February, the city pays about $4,000 to provide them with natural gas to heat their homes. [In February], the bill came to $242,498.”

These stories are hardly outliers. From homeowners to businesses, towns, cities and even natural gas-powered electric utilities, the February spike in natural gas prices was an economic disaster that will leave consumers facing higher gas bills for years to come.

It is hard to walk away from the February crisis and its still unfolding consequences with the feeling that the nation should deepen its reliance on the natural gas delivery system and a fuel that has proven time and again troublingly susceptible to price spikes.

As the nation grapples with navigating the energy transition and building a responsible and reliable path forward, there’s overwhelming evidence that the fuel security and balance offered by the coal fleet must not be pushed aside. The bridge consumers need to get where we are going is not greater reliance on natural gas and the inherent vulnerabilities of just-in-time fuel delivery, but rather the balance and optionality provided by a diverse fuel mix. 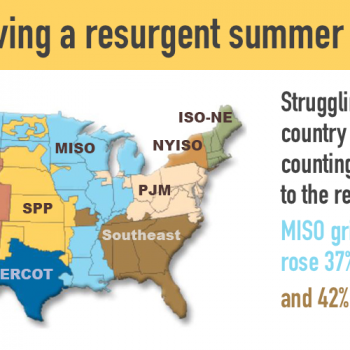 Amid Rising Energy Cyberattacks, Coal is our Insurance Policy