Via The Anchorage Daily News:

Anchorage IBEW business manager Dave Reaves recently declared that because of climate change, Alaska needs to move away from using many traditional energy resources that it has relied on for decades.

Interestingly, Reaves said little about the economic devastation this would cause in Alaska and throughout the nation. President Joe Biden’s decision to cancel the Keystone XL pipeline has snuffed out thousands of jobs in the Lower 48, many of them good-paying union jobs. Meanwhile, Biden’s decision to shut down further oil and gas leasing on federal lands is estimated to wipe out around 3,500 jobs in Alaska, also including many union jobs. The IBEW endorsed Biden for president. Reaves seems to be practicing damage control as the pain of Mr. Biden’s job-killing policies becomes real for working families everywhere.

Reaves zeroed in on the Fairbanks region, arguing that it must “move away” from coal, diesel and wood, and instead use liquefied natural gas and renewables. The oft-repeated narrative that coal will be replaced by renewables or natural gas is seldom questioned. But how realistic is that? Fairbanks and the surrounding communities rely on coal for roughly 30% of their energy needs, and there is no readily available alternative.

Natural gas is not available on such a large scale, and if it were, it would be exorbitantly more expensive than coal. Coal is Interior Alaska’s lowest-cost source of energy, and switching to other fuels would increase regional energy costs by at least $140 million annually.

Recently, when the University of Alaska Fairbanks had to decide on replacing a half-century-old coal power plant on campus, they examined every conceivable alternative: natural gas, oil, even nuclear power. The university’s analysis concluded that coal would meet their heating and power needs at a small fraction of the cost of other fuel sources. As a result, UAF is now operating the newest coal power plant in the U.S. It’s also one of the most environmentally advanced coal plants yet built, achieving enormous reductions in emissions.

Of greatest offense is Reaves’ false assertion that coal is responsible for Fairbanks failing to meet air quality standards, and that this “threatens military bases in the area.” Numerous air quality monitoring studies have disproved that claim. The coal power plants in Fairbanks do not have a significant impact on the particulate matter levels that undermine air quality.

Coal has provided energy security to Eielson Air Force Base and Fort Wainwright Army post for decades. Switching to alternative fuels would burden the military with massive cost increases — the same price hikes that UAF foresaw and successfully avoided by sticking with coal. Military spending supports about one-third of the Fairbanks economy. Any large increases in energy costs could potentially risk the sustainability of the military’s current presence in Interior Alaska and threaten the Fairbanks economy.

There is widespread agreement among environmental regulators that the best way to improve air quality in Fairbanks is for homeowners relying on wood for heating to burn dry firewood instead of wet firewood. The Usibelli family recently made a major investment, through Aurora Energy Solutions, to secure the first wood-drying kiln in the Fairbanks area. This will greatly reduce the emissions from firewood burning. This is an example of how technological innovation can help us utilize an affordable, traditional fuel source in a way that greatly reduces emissions, while avoiding the massive expense of switching to alternative energies that are not economically viable.

With every coal plant that closes because of government intervention, the risk to human health and welfare increases as the capacity of utilities to provide affordable energy is crippled. Those who are most hurt by rising energy costs are low-income families that can least afford it.

What we need is investment in technological innovation to help reduce emissions from fossil fuels. Advanced coal generation technologies have a significant role to play in meeting our national security, economic, energy and environmental objectives. These technologies include carbon capture, utilization and storage, high efficiency-low emissions technologies, and transformational technologies with potential to achieve near-zero carbon emissions.

It is not necessary to radically abandon our existing energy sector in order to meet an unrealistic, unsustainable, fantastical goal of zero emissions by 2035.

Joe Usibelli Jr. is the current president and CEO of Usibelli Coal Mine Inc. in Healy. Joe Jr. is a member of the third generation of the Usibelli family to run the mine, which is still family-owned and operated.

The Texas Grid Crisis is a National Crisis 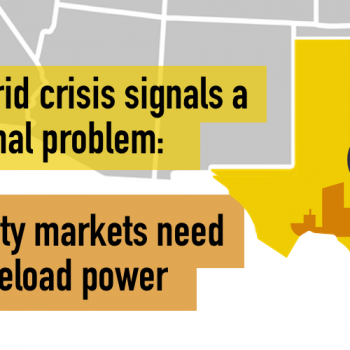 In the Wake of the Texas Power Crisis, Voters Want the U.S. to Maintain Fuel Diversity to Support Reliability