Another winter, another cold snap. Right now, much of the United States is feeling the chill of a brutal “Polar Vortex.” And northern states like North Dakota and Minnesota are seeing night-time temperatures drop below zero degrees Fahrenheit. In fact, Duluth is currently chasing a record for the coldest sustained weather, set way back in 1912.

Millions of Americans are counting their blessings that they can shelter in place and stay warm during such merciless weather. It’s the good fortune of living in an industrialized nation that has steady 24/7 power generation to keep families alive and safe.

These Arctic conditions are particularly interesting, though, since they provide a stress test of America’s power grid. We’re seeing in real-time exactly how the U.S. electric grid fares when it’s being pushed to the limit.

The Midcontinent Independent System Operator (MISO )— which oversees power transmission in 15 states — maintains a continuous read-out of its fuel mix. And what MISO is reporting is that—in a time of particularly heavy demand — coal is currently generating more than half of its overall electricity. In fact, a February 10 snapshot of MISO’s grid showed coal producing roughly 41,000 megawatts of electricity, with natural gas coming in second at 22,000 megawatts.

This isn’t exactly what we’re told about America’s power grid. We often hear that advances in solar power and wind turbines have allowed more and more renewable energy to come online. But when push comes to shove — as it has during the current Arctic blast — coal is proving to be the sturdy fuel that can step in and carry the load.

On the afternoon of February 10, MISO’s customers were drawing roughly 78,000 megawatts of electricity at any one time. And coal generation’s steady 41,000 megawatts anchored more than half of this demand.

But what about wind and solar? Solar panels delivered roughly 231 megawatts at the time. And wind turbine output fluctuated widely, topping out at around 3,200 megawatts. That means these much-vaunted renewable systems produced only about 4 percent of the electricity needed across 15 states.

This hefty electricity demand was so serious that MISO posted several cold weather alerts to warn utilities in the central and northern states of temperatures heading for -10 degrees Fahrenheit. MISO specifically wanted to prepare them for potential “fuel restrictions” during peak demand.

But what about next month, or next year? Or five years from now? President Biden is aiming to eliminate all coal and natural gas plants from the U.S. power grid by 2035. How might the nation subsist during a Polar Vortex in 15 years — with none of the coal plants that are currently doing the heavy lifting?

The sensible plan would be to continue following an “all-of-the-above” fuel mix. Wind and solar can certainly contribute to the nation’s power grid. But smart planning dictates that coal, natural gas, and nuclear power will still be needed to help with the heavy lifting during uncooperative weather.

The sensible plan would be to continue following an “all-of-the-above” fuel mix. Wind and solar can certainly contribute to the nation’s power grid. But smart planning dictates that coal, natural gas, and nuclear power will still be needed to help with the heavy lifting during uncooperative weather.

A Fuel Security Crisis in Texas 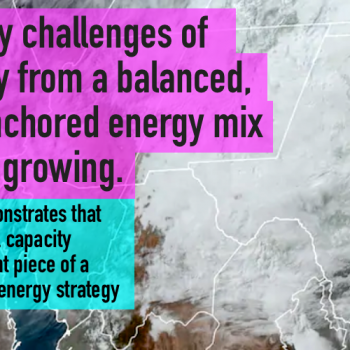