Coal plants are providing a stable and secure supply of electricity in many parts of the United States. This “baseload” power from coal, an often forgotten workhorse of electricity generation, accounts for about 25% of the nation’s generating capacity.

As a former communicator for the National Coal Association and other fossil-fuel groups, I value coal’s role in helping to power the nation’s economy. Without access to our own coal resources, we would have been even more dependent on imported oil. And coal has supported hundreds of thousands of workers and their families. It still has an important role to play in meeting the need for power in the United States and globally.

In this difficult time, when many industries and businesses have shut down or scaled back their operations because of the coronavirus epidemic, experts foresee a dramatic decline in demand for power that could equal or even surpass the 15% decline seen in China and some European countries.

Contrary to what one would expect from such a collapse in power demand, we’re now getting an idea of how expensive and unwise it has been to shut down hundreds of coal plants – not to mention even more plants due to be shuttered in the near future. Here’s why:

If there’s a big drop in demand for power, the share of variable – thus unreliable — renewables like solar and wind becomes higher than normal. With reduced electricity demand, power generation is abundant. However, electricity system operators have to constantly balance supply and demand. People typically think of power outages happening when demand overwhelms supply. But, in fact, some of the most high-profile blackouts and brownouts in recent times took place in periods of low demand like the financial collapse a few years ago.

Today’s dramatic drop in electricity demand highlights the crucial role of coal in ensuring electricity reliability — and in making sure that tomorrow’s electricity systems remain dependable even as they are transformed by the use of solar and wind. But, unfortunately, coal is at a serious disadvantage in competing for electricity sales.

Coal plants get absolutely no compensation for their importance to local economies and the stability of the electrical grid. If those attributes were valued instead of ignored, many coal plants would not have been shuttered. State governments need to address this matter, by recognizing and attaching a value to coal so that coal plants can continue to help in meeting our electrical energy needs. To save coal plants, legislatures will need to act promptly.

This is not an academic matter. At some recent auctions of wholesale electricity, grid operators chose electricity produced by renewables. Given the fact that coal receives no value in the market for its contribution to electricity reliability, could utilities decide to shut down more coal plants prematurely? Absolutely. But anyone who thinks we can simply substitute solar and wind power should check the numbers. Solar and wind combined account for only 8% of the nation’s electricity supply. In contrast, coal provides about 25%, supplying power around the clock, regardless of weather conditions. Failing to recognize coal’s value in undergirding the electric grid is a mistake.

Eliminating market distortions would save consumers money, protect billions of dollars in investment in coal infrastructure, and preserve well-paying jobs. It’s past due time to make regulatory changes so that coal plants get equal treatment.

Accomplishing what is needed with states will take diligence and patience — a sustained bearing down to reach solutions.

State governments are rightly focused on the immediate public health emergency, but they have to remain vigilant on electricity security. In these extraordinarily difficult times, we can do without many things. But we can’t do without electricity. 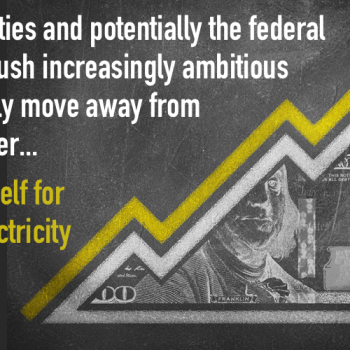