Via The Eastern New Mexico News:

Are renewable sources of energy ready to stand on their own two feet?

After billions already spent and substantial subsidies that continue, wind and solar power generated only 9% of U.S. demand in 2019.

Replacing fossil fuels with solar and wind power will take decades and the costs, as well as the challenges to grid reliability, remain stunning. Yet demands for net-zero emissions and a renewable only future by 2050 are proliferating from climateers.

The Green lobby insists that renewables are cost competitive even in the absence of special incentives, but it would go ballistic if a serious effort was mounted to eliminate federal tax credits for wind or solar power.

But that’s exactly what must happen.

Wind and solar power are now mature technologies and they are more than capable of growing on their own. More importantly, the government support they have been provided must be refocused on the energy breakthroughs the world needs and the fuels the world will lean on well into the future.

The extent to which green scenarios have become disconnected from reality was driven home by a report on the world energy outlook in 2040 from the International Energy Agency. Despite wind and solar power’s growth globally, fossil fuels will remain the bedrock of the world’s energy mix. In fact, coal continues to be the world’s leading fuel for electricity generation and global coal capacity is growing.

Most environmentalists don’t seem aware of what’s going on in Asia. The fact is, more than 600 new coal plants are under construction and many existing coal plants are relatively new and capable of generating power well into the future.

That’s a remarkable development, because while it’s true that dozens of coal plants have closed in the United States, we’re also witnessing a surge in coal generation in Asia.

And it’s not limited to China. Japan plans to build about 20 coal plants over the next five years. Vietnam, Indonesia and other Asian countries are adding new coal-generating capacity as well.

What this means is that it’s time for those advocating climate action to refocus on advanced coal and fossil fuel technology. There is no path to global emissions reduction without working with Asia’s growing and young coal fleet. The world desperately needs U.S. leadership to develop and demonstrate essential advanced technologies. Increased efficiency for existing plants, new environmental controls and furthering carbon capture, utilization and storage technologies all should be part of our approach.

Some of the most important work will be creating uses for the carbon captured from plants. Promising work is already underway to turn these waste emissions into concrete.

You don’t need a degree in chemistry or economics to know that other products are possible — and that profits from their production could help to offset the cost of carbon mitigation. For this to happen, however, the United States will need to rise to the challenge and make effective use of its leadership in technology innovation.

Government research labs with generous funding have supported a number of energy breakthroughs — from nuclear power, to hydraulic fracturing, to wind turbines and solar photovoltaics. That’s the power of technology. Innovation at its most creative is transformative.

The data is clear: coal is here to stay. Are we up to the challenge of embracing that reality and ensuring we produce the technology solutions the world needs? If green energy can’t scale up fast enough to make much of a difference — and it’s increasingly doubtful it can, the United States should ensure that clean coal technologies will.

Doing so should be atop our energy agenda.

For Millions of Families, Affordable Power Has Never Mattered More 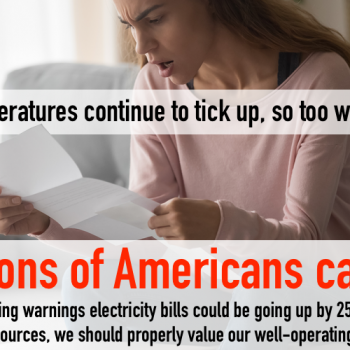