The ongoing COVID-19 pandemic has sowed immense uncertainty about the future, but it’s becoming clear that consensus is rapidly forming to bring manufacturing and essential supply chains home from China. Doing so is going to require a recommitment to economic competitiveness, and maintaining affordable, reliable energy will have to be top of the agenda.

Difficulty obtaining personal protective equipment (PPE), ventilators and pharmaceuticals to combat the outbreak confirmed what many experts have been saying for years: America’s vital supply chains are alarmingly vulnerable. Offshoring has hollowed out much of the nation’s industrial base, long considered a cornerstone of the nation’s economic foundation.

Senator Marco Rubio of Florida recently said of the challenge, “One of the things that has happened with this pandemic is it’s revealed to everybody the limits to our digital superiority… You still have to be able to make things. You still have to have industry and industrial capacity as a country. And we’ve given a lot of it away.”

Senator Mitt Romney of Utah blasted China for its “industrial predation,” making a strong case to bring industry home and stand up to China’s anti-competitive practices and economic aggression.

And House Minority Leader Kevin McCarthy of California recently wrote, “We must prioritize our PPE stockpile and critical supplies, such as pharmaceuticals, medical supplies, food, and critical minerals, and grow domestic and diverse sourcing so we are less vulnerable when the status quo supply chains fail — like they did within China.” He concluded, “The United States should never be so dependent on another country that their economic collapse, closed factories, broken supply chains, and corrupt leadership brings us to our knees with them.”

These lawmakers may all be Republicans but bringing home industry and reshoring manufacturing jobs has broad bipartisan support. An effort to do so is coming but succeeding will be easier said than done. It could be near impossible if incentives for reshoring are forced to swim against the current of rising energy prices or questions about grid reliability.

The continued loss of essential fuel-secure coal capacity and the shift towards intermittent sources of power and greater reliance on just-in-time fuel delivery is already pushing up prices in some states and posing troubling questions about grid reliability and resilience.

Yet, an adversarial approach to coal and ever more ambitious renewable portfolio standards – which the University of Chicago confirmed drive up electricity costs – pose a growing threat to domestic manufacturers and heavy industry fighting to survive in a cutthroat global marketplace.

The Boston Consulting Group observed that from the early 2000s to 2015, U.S. manufacturing cost competitiveness improved against major manufacturing economies. However, since 2015 it has fallen, due largely to “a declining energy-cost advantage as gaps in global energy prices narrow.”

Ensuring an affordable and reliable supply of power won’t just be critical to helping consumers get back on their feet during recovery, it also may make or break efforts to re-shore American manufacturing and rebuild critical supply chains. Letting the nation’s coal fleet slip away, precisely when we need it as a foundation for recovery, would be a terrible mistake.

In 2018 NERC Warned of a Reliability Crisis from Accelerating Baseload Retirements. It’s Here. 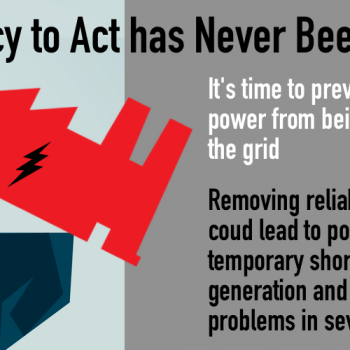