Just a week ago, (and what a week it has been) International Energy Agency Director Fatih Birol testified before the Senate Energy and Natural Resources Committee. Asked what technology is most essential to tackling emissions, he didn’t mince words. “If I had to pick one technology as the most critical, if I had a magic touch to make this technology mature and [gain] market share,” it would be carbon capture, he said.

This wasn’t the first time Director Birol has said as much. Last year, standing shoulder to shoulder with then Energy Secretary Rick Perry, he delivered the same deeply important message. It’s a message that desperately needs to resonate in Washington. It’s past time key policymakers who claim to care the most about emissions reduction start listening.

Consider that Senator Bernie Sanders, despite proposing to spend more than $13 trillion on a Green New Deal, rejects the need for carbon capture, calling it a “false solution.” In reality – a reality Senator Sanders and his bros need to accept – any proposed solution that doesn’t include carbon capture is a false one.

As Director Birol testified, oil, coal and natural gas are here to stay. Fossil fuel use – which meets 80% of global energy demand – isn’t falling despite the growth of renewable sources of energy. The world is firmly in an era of energy addition, not a period of transition. Global energy demand is expected to grow by 50% by 2050, with global electricity demand also expected to grow by a staggering 79% in the same period.

To put a finer point on it, Director Birol said, it is “completely wrong” to declare the end of the coal era, adding that global coal consumption increased by 65% between 2000 and 2018. He concluded, “Energy is a good thing. Emissions is a bad thing. Some people confuse it.”

The confusion must end. Even in the richest nations on earth, where heavily subsidized renewable sources of power are growing thanks to tremendous government support, the challenges of integrating these sources of power and balancing their intermittent energy production is proving increasingly complex and costly. The need for dispatchable, fuel-secure, reliable power remains a constant. Whether it’s helping to integrate wind and solar power onto the grid in industrialized nations like the U.S. or Japan, or bringing reliable power to energy-hungry, developing economies, coal remains irreplaceable. U.S. leadership in developing and deploying carbon capture technology remains irreplaceable as well.

The challenge of meeting soaring global energy demand while simultaneously reducing emissions begs for breakthroughs in technologies that can reduce emissions from the energy infrastructure the world currently has and from the fuels it will continue to use. The most critical technology to doing so, as Director Birol has so rightly stressed, is carbon capture. Will the message finally get through?

Tackling the Challenge Head On 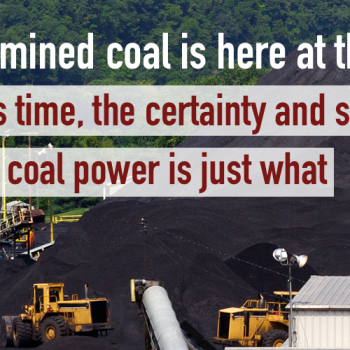