Via The Pennsylvania Capital Star-Tribune:

Like much of the United States, Pennsylvania is moving toward a low-carbon energy future. That effort will likely be defined by a pivot to renewable sources of power. Surprisingly, the most important breakthroughs for achieving lower emissions in the years ahead may not come from wind turbines and solar panels but advanced coal and natural gas technologies currently being developed in Pennsylvania.

However, renewable energy is starting to figure more prominently in Pennsylvania’s power grid. In 2018, renewables contributed nearly 5 percent of the state’s electricity. Wind turbines delivered 36 percent of that clean energy tally—with hydropower a close second at 35 percent. Facilities that burn biomass accounted for another 24 percent. Solar delivered only a scant 5 percent—though the number of solar installations across the the state is now increasing.

Renewable advocates might ask, if Pennsylvania is starting to add more renewable sources to its grid, why should coal and natural gas matter in the future?

The answer stems in part from the intermittent nature of wind and solar power. Neither can generate electricity when the weather doesn’t cooperate. And so, during weather disruptions, renewable systems typically require “spinning reserves” of back-up electricity. Typically, these are sourced from natural gas or coal plants capable of ramping up to provide power on short-notice.

Because coal and natural gas will likely fill this back-up role for years to come, the U.S. Department of Energy (DOE) is trying to find ways to realistically meet future emissions targets.

The DOE is studying the feasibility of small, extremely efficient coal units that could ramp up as needed to provide fill-in power. These units would have near-zero emissions, thanks to carbon capture technologies now in development.

The DOE is also exploring the possibility of small, modular nuclear reactors that could help to ensure grid resilience during blackouts or extreme weather events.

Pennsylvania has a particular stake in all of this groundbreaking research. The National Energy Technology Lab (NETL), which is currently researching carbon capture and storage systems (CCS), is conducting much of its work at a campus in Pittsburgh.

The NETL’s work gives Pennsylvania a chance to lead the nation in a potentially game-changing development of CCS technology. International Energy Agency (IEA) Director Fatih Birol recently testified before the Senate Energy and Natural Resources Committee. He noted that carbon capture and storage is the most “critical” technology for reducing emissions. Birol also sees nuclear power as essential to meeting zero-emissions requirements.

Birol explained that, if he “had to pick one technology as the most critical,” it would be carbon capture. He said, “I cannot think of any technology more crucial.”

Why the urgency about CCS? Because transitioning to abundant renewable power generation could take many years. As noted above, only 5 percent of Pennsylvania’s electricity currently comes from renewables. And a quarter of that comes from the burning of biomass—which carries its own carbon footprint.

Making the leap to 25 percent—or 50 percent—renewable generation will require a staggering lift. To achieve emissions reductions in the intervening years will necessitate a full suite of advanced technologies. And natural gas and coal could bridge that gap reliably and affordably with CCS systems.

Pennsylvania can help to make the United States a global leader in advanced energy technologies. Dispatchable, zero-emissions power will be needed in the years ahead, even as the nation begins to ramp up its

renewable energy quotient. And whether future electricity needs are met with advanced coal, nuclear, or natural gas technologies, there’s the promise of a real energy renaissance. That’s something that can benefit both Pennsylvania and the United States. 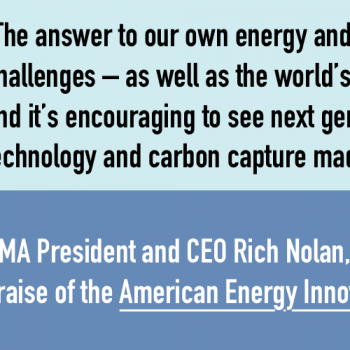