Keeping the Lights on is Essential Work

Keeping the Lights on is Essential Work

It would be difficult to find a piece of “news” coverage more out of touch with communities across our country than The Washington Post’srecent article questioning the essential nature of coal mining.

From his perch in Washington, D.C., the writer brushes off coal’s contributions to the grid noting that “coal provides less than a quarter of America’s electricity.” Ask West Virginia (92 percent), Indiana (nearly 70 percent), Kentucky (74 percent), Missouri (72 percent), Utah (65 percent) or many other states where coal provides the vast majority of power just how important the coal industry is.

While the article asks questions about the particular risks posed to miners from coronavirus (more on that later), the real thrust of the piece asks do we need mines operating, do we need coal power at all? Even posing the question reveals a gross misunderstanding of not only coal’s essential role on the grid but how grid operators maintain a reliable supply of power.

The fact that coal power provides a quarter of the nation’s electricity is not only significant – it’s a tremendous amount of power. In comparison, wind and solar generation provided less than 10 percent of the nation’s electricity in 2019. And coal generation time and again comes to the rescue to stabilize the grid during periods of peak demand when other sources of power can’t answer the call. The fuel-secure, on-demand power provided by the nation’s coal fleet continues to fill an irreplaceable if underappreciated role.

Clearly, it’s a role greatly dismissed by The Washington Post. Fortunately, it’s not one underappreciated by the Department of Homeland Security (DHS) which designates mining as a key piece of the nation’s critical infrastructure. For these critical industries, DHS has said, “you have a special responsibility to maintain your normal work schedule.”

If there is one thing that defines coal miners, nearly to the man and woman, it’s a sense of service. They know their work is essential. They know the coal they mine keeps the lights on in homes and hospitals. And they know their job carries unique risks. They also know that they work in one of the most heavily regulated industries in the world where safety is always the top priority.

Mining operations across the country fully realize the threat posed by the virus and the stress it’s already placing on the nation’s healthcare system. Operations have been adjusted and continue to be adjusted as the industry and our world learn more about this new threat. Each mine is different so each operator is adapting according to its own unique circumstances. For example, distancing measures are being taken, increased cleaning schedules are in place as well as limits on gatherings of groups.

There are many industries still doing critical work to keep the country running during this most challenging of times. From sanitation workers, to mail carriers and grocery store workers, there are countless underappreciated jobs where people are taking real risks with the little of the safety culture or equipment ubiquitous in the mining industry. There are also many jobs – and too many people – taking risks for far less essential tasks than keeping the lights on and homes warm. Maybe The Washington Post can find time to write about them?

An Essential and Irreplaceable Industry Now and Tomorrow 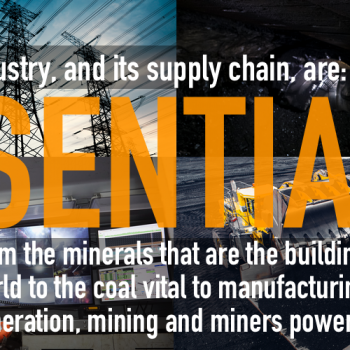