The National Mining Association (NMA) today issued the following statement from Rich Nolan, NMA President & CEO, applauding the Department of the Interior’s Bureau of Land Management (BLM) for concluding its final environmental assessment and finding no significant impact that would impede processing applications for new coal leases on federal land.

“Efforts under the Obama administration to derail the federal coal leasing program were driven by misguided, keep-it-in-the-ground politics. It’s past time to move forward and continue with a program that has been a national energy and economic success story.”

“Federal coal production provides a fair return to the public, generating hundreds of millions of dollars of federal, state and local revenue per year, while also providing a low cost, reliable source of energy. Coal production on federal land remains a cornerstone of the president’s energy dominance agenda.”

In March 2017, then Secretary of the Interior Ryan Zinke lifted the moratorium on coal leasing, ending the prior administration’s discretionary and exploratory process – a process that the agency itself started.  In lifting the temporary suspension, the agency took no actions that would trigger the National Environmental Policy Act (NEPA).

In June 2018, the United States Court of Appeals for the District of Columbia Circuit agreed, ruling that the Interior Department was under no obligation to conduct a programmatic EIS on the program. The Department completed a programmatic EIS for the current coal leasing program and has continually conducted NEPA reviews for coal leasing on both regional and site-specific bases. Moreover, NEPA reviews are also conducted prior to any mining on a lease when the Department reviews the mine plan submitted by the mine operator under the Federal Coal Leasing Act.

In April 2019, however, in a sharp departure from precedent on the types of federal agency actions that trigger NEPA, a federal district court in Montana ruled that a NEPA review was required before discontinuing the voluntary programmatic environmental analysis. This ruling not only contradicted the prior DC Circuit ruling, but ignored the fact that under the court’s reasoning the real action violating NEPA was former Secretary of Interior Sally Jewell’s order halting federal coal leasing, not Secretary Zinke’s action lifting the agency’s own voluntary pause on leasing. The court’s decision cast considerable uncertainty over the ability of the federal agencies to adopt policies that traditionally have been considered to be solely within their discretion.

BLM complied with the Court’s direction and this announcement concludes that process.

Ensuring a Future for the Black Lung Disability Trust Fund 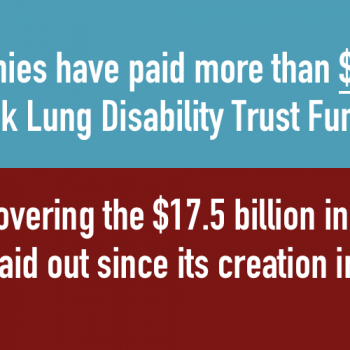