The U.S. has a growing energy infrastructure problem. More precisely, major transmission lines needed to move wind and solar power from regions of production to centers of demand aren’t being built at nearly the pace needed. Natural gas pipeline additions are also failing to keep up with gas demand.

One infrastructure project after another is running into exorbitant transmission upgrade costs or a permitting gauntlet where NIMBYism is proving remarkably disruptive and, in many cases, insurmountable. The results are soaring electricity congestion costs, emerging fuel security crises and obstacles so great generation developers are cancelling projects altogether.

In many places, transmission hurdles have decimated planned renewable energy additions and where capacity is being built it has taken herculean efforts and jaw dropping costs.

Consider the shrinking pipeline of renewable projects in the Dakotas, Minnesota and Iowa. In 2017 more than 5,000 MW of renewable energy projects were approved for interconnection. But in-depth study of the projects revealed they would require transmission upgrades with price tags often costing hundreds of millions of dollars. The rubber met the road. Less than three years later, just two projects totaling 250 MW of capacity were still hoping to move forward. There’s little confidence they do.

Or look to Texas’ Competitive Renewable Energy Zone project, which connected wind generation in the Texas panhandle to population centers in the middle of the state. Its price tag topped $7 billion. The $7.8 billion natural gas Atlantic Coast Pipeline recently lost its air quality permit and an appeal is headed to the U.S. Supreme Court. It should surprise no one that far more projects are dying in the courts or under mountains of red tape and exorbitant costs than those that are getting built.

An obvious conclusion to draw from the transmission boondoggle is this: we must be realistic. The barriers to infrastructure – be it new transmission lines, pipelines, roads or bridges – are tremendous. These are barriers that will not come down overnight. Rebuilding the grid, adding thousands upon thousands of miles of high voltage transmission lines, precisely where they are not wanted, is going to be incredibly expensive, slow and potentially impossible. That’s a reality policymakers at the state and federal level, as well as utilities, must appreciate. It’s this reality that must better inform how we appreciate and value our existing infrastructure.

There is a deeply worrying trend of announcing the closure of well-operating, essential coal plants, that are already well-integrated into the existing grid, to meet aspirational renewable energy goals with no plan of how to achieve them. Nor does there appear to be an honest appreciation of the challenges of doing so.

Despite falling wind and solar unit costs, moving to a grid saturated with variable power is only going to get more costly and difficult, not less. The on-the-ground experience borne out in Texas, California or Germany is proving as much. The hourly challenges that intermittency poses are acute; the seasonal challenges when solar or wind generation drop for months at a time are humbling. Even what would appear to be the easier parts of the puzzle are proving tremendously difficult. Building new and essential transmission, both here and abroad, is case in point.

We are losing the coal fleet at accelerating speed with no coherent plan on how to replace it. The affordability of our power supply, the competitiveness of American industry and the reliability of the grid now hang in the balance. It’s past time we learn to better value the grid and electricity mix we have before we jump headfirst into a future we’ve yet to prove we can achieve. 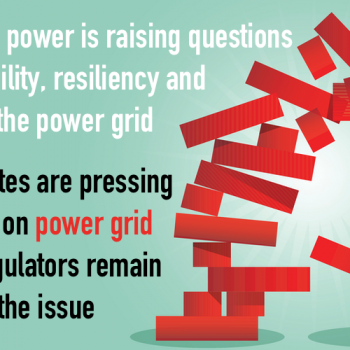