Via The Memphis Commercial Appeal:

The Farmer’s Almanac is predicting a “colder-than-normal” winter this year, with plenty of snow in January. If they’re right, and heavy snowstorms are coming, there’s one thing Americans need to survive a rough winter: sturdy, non-stop electricity to stay warm and safe, no matter the weather.

Unfortunately, that reliability may be tested this winter, as the nation’s power grid undergoes profound changes.

Today, coal has fallen to 27% of U.S. electricity production while natural gas has climbed to 35%. Nuclear generates roughly 19% and non-hydropower renewables have risen to 12%.

Essentially, the United States has reduced its coal capacity while shifting to a greater reliance on natural gas. At the same time, government subsidies have helped renewables to increase their market share as well.

In Texas, for example, subsidized wind generation has displaced many of the coal plants that once anchored the state’s power grid. But wind turbines can fail to produce power when it’s needed most.

Last March, Texas electricity demand peaked during a stretch of unexpectedly cold weather. However, a lack of wind meant the state’s wind turbines delivered only 16% of their average output. And that forced spot electricity prices in north Texas to jump 700%.

Even worse for Texas was an August heatwave that drove electricity demand to an all-time high. Just as electricity demand skyrocketed, the state’s wind farms failed in the hot, slow weather. Electricity prices briefly surged past $9,000 per megawatt-hour. The region nearly hit a breaking point, with available power reserves dwindling to a safety margin of less than 3%.

The nation has also grown more reliant on a sprawling network of natural gas pipelines. During last January’s “Polar Vortex,” thousands of Rhode island residents were left without natural gas service due to low system pressure.

At the same time, Xcel Energy in Minnesota urged customers to switch their thermostats as low as 55 degrees due to “significant” strain in the natural gas system. Detroit’s DTE Energy asked customers to limit electricity usage. And Chicago-area wind turbines were shut down, forcing coal plants to cover the region’s needs.

These are worrying trends. And they contradict the instincts of the American people. A recent poll by Morning Consult found that 70% of Americans favor an all-of-the-above energy strategy, including natural gas, coal, renewables, and nuclear power as part of a balanced energy policy.

The United States is slowly dismantling its sturdy baseload power plants and replacing them with less reliable alternatives. It’s past time for regulators and policymakers to act to ensure the long-term stability of the nation’s electric grid. 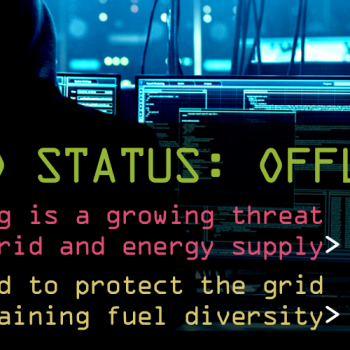