From 2007-13, I served as a commissioner on the Missouri Public Service Commission. During those six years, my fellow commissioners and I were focused on making sure our state had ample electricity around the clock. And we continuously looked for ways to ensure that electricity remained affordable throughout the state — particularly for working families and small businesses.

As the debate over America’s energy future takes center stage, I’m reminded of something that happened to one of my fellow commissioners.

He was shopping at a local store when an angry Missouri resident confronted him. The person was furious that his family’s electric bills were increasing almost every year. He wanted to know why his rates were going up and what the commission was going to do about it.

That incident has stayed with me — and it captures an essential point. Roughly one-third of all U.S. families are struggling to pay their electric bills, according to the U.S. Energy Information Administration. And roughly one in five U.S. households are forced to skimp on necessities such as food and medicine in order to pay for monthly electricity.

Simply put, many families live in homes that are too cold in the winter and too hot in the summer. But that’s what it takes for them to pay their utility bills.

Americans understand exactly what’s at stake in keeping their lights on. And national polling shows that a full 70 percent of them want the United States to pursue an “all-of-the-above” energy strategy, including natural gas, coal, renewables and nuclear power. It’s simply the necessary approach to keep meeting the energy demands of almost 330 million people — and at an affordable price.

There are two competing issues here. The first is the movement toward greater deployment of renewable energy systems in the United States. Technological advances have clearly helped to make wind turbines and solar panels more prominent in recent years.

But even with hefty subsidies, these weather-dependent forms of electricity generation have proven to be complex and expensive. For example, Texas jumped headfirst into the large-scale deployment of wind turbines. And as a result, the state’s longtime coal plants could no longer compete in the region’s electricity market.

All of this bears out what a University of Chicago studyreported in April. States with renewable energy portfolios have experienced average retail electricity prices 11 percent higher than in other states. And consumers in these states have paid $125 billion more for electricity than they otherwise would.

These are significant costs for working families — and voters overwhelmingly want to explore all possible options, including wind and solar, coal, nuclear and natural gas. The good news is that there are new technologies coming online that can generate electricity more robustly and more safely.

When Americans call for an “all-of-the-above” energy strategy, they’re thinking in practical, real-world terms. It’s time for Washington to follow suit — and pursue such advanced, new technologies to achieve the balanced electricity mix that consumers want. 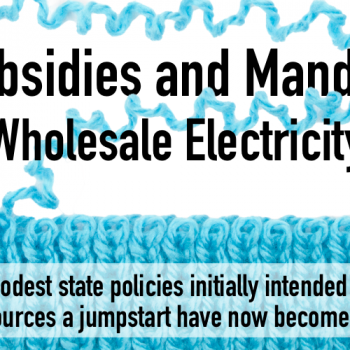