The Texas electricity market is nothing if not unique. It has been described as having a “Vegas-like quality,” referring to its boom and bust potential. There are moments when no one is quite sure if the lights will stay on that it possesses all the drama of a roll of the dice at the craps table. Analysts from Wood Mackenzie have gone as far as describing it as being “designed to play chicken with blackouts.”

The Texas grid did not disappoint for drama last week. Electricity prices in Texas spiked from their normal range of $20 to $30 per megawatt-hour to their market cap of $9,000 not once but twice. The grid came perilously close to losing that game of chicken, entering emergency operation as its reserve margin of generating capacity evaporated under sweltering heat and the state’s wind generation proved largely a no-show just as electricity demand peaked.

These spikes in electricity prices – this baked-in volatility – might be considered palatable if it encouraged the addition of new generating capacity to increase the reserve margin and ensure grid reliability. The problem is, the reserve margin is expected to get even tighter next year. And then when new capacity is added in the years ahead, it’s likely to be capacity that does more harm than good. The Texas market design is teetering on the edge of collapse.

As Wood Mackenzie warns, Texas is likely a bellwether for the feasibility of heavy reliance on variable wind and solar power. While no major electricity system in the world relies on more than 30% wind and solar generation, Texas is headed that way. Wind power is expected to generate 20% of electricity on the Texas grid this year and it will soon be complemented by significant solar capacity additions over the next decade.

Today, solar generates little more than 1% of the state’s electricity, but new solar, spurred by subsidies, could be some of the first capacity out of the gate in response to the market’s current capacity crunch. Unfortunately, instead of shoring up grid reliability, it could very well undermine it. The problem is that even a relatively small amount of new solar capacity could depress power prices for other essential, baseload power plants, making them less competitive. In other words, you might be getting capacity additions, but those additions are likely to cause far more significant capacity losses. Trading dispatchable, baseload power plants that buttress grid reliability for capacity that undermines it is hardly an ideal scenario for a grid barely managing to keep the lights on.

As Wood Mackenzie explains, “Solar’s early growth is going to directly eat into every other plant’s profit, and eventually its own. Just like the (in)famous California duck curve, price peaks will shift to when the sun sets, but whereas California has instituted myriad policy mandates, regulatory mechanisms and reliability contracts to advance investments in new carbon-free solutions and keep the lights on, Texas will likely be ‘policy-light’ by comparison.”

Texas need not be policy light, nor does it need to follow California’s cumbersome and increasingly expensive footsteps. California is hardly a model for sound energy policy. Electricity prices in the golden state have risen 30% since 2011 and are expected to go much higher.

As Texas careens down this path, coming ever closer to slipping off the edge towards rolling brownouts or blackouts, it’s in desperate need of guardrails. A new capacity market that properly values the reliability afforded by baseload, dispatchable power plants could provide them. It was the loss of essential baseload power plants, namely coal capacity, that pushed the market to its current perilous state. That should not be allowed to happen again.

Regulators in Texas, and in other states and regional grids, should act now to ensure their markets are capable of properly valuing the security, balance and reliability afforded by baseload generation. It shouldn’t take a crisis to spur action. Playing chicken with blackouts is hardly responsible policymaking.

Don't Overlook the Challenges of Integrating Wind and Solar Power 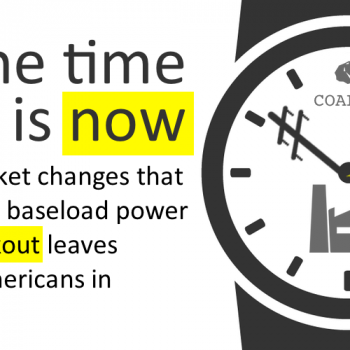