Don’t Overlook the Challenges of Integrating Wind and Solar Power

Don’t Overlook the Challenges of Integrating Wind and Solar Power

Thanks to advances in technology, the price of generating electricity from solar and wind power has fallen significantly over the past decade. And that’s been helpful for America’s economy, including sectors like high-tech manufacturing and domestic mining that have contributed to these achievements. But even as the price of generating power from renewable sources has fallen, the cost of integrating their intermittent electricity has actually started to grow. It’s a puzzling dynamic, and one that’s bound to grow more challenging.

Consumers are probably unaware of it, but the cost of generating electricity accounts for less than half of the total cost of monthly utility bills. The logistics of transmission and distribution are equally important in determining prices. And now, transmission issues for renewables are starting to drive up overall electricity costs.

Renewable systems are most effective when sited in areas with plenty of sun, wind, and open land. But that often means building them far from the population centers they serve. And that requires new transmission infrastructure. As Brian Murray, Director of the Duke University Energy Initiative, recently explained, this impacts overall electricity costs: “Between 2012 and 2017, when non-hydro renewables generation grew by 77 percent, transmission costs rose by 50 percent.”

While Murray cautions that not all of the increase in transmission costs comes from renewables, their influence weighs heavily on the scale. The large, high-voltage transmission projects that would be needed to move wind power from the Great Plains to major cities will be exorbitantly expensive. And a project connecting wind generation in the Texas panhandle to population centers in the middle of the state cost $7 billion.

As renewable portfolio standards have grown more ambitious, the share of renewable power (other than hydroelectric dams) in the U.S. has risen to roughly 10 percent of total generation. But that has come with significant costs. And adding additional renewables — as states and utilities are proposing to do — is only going to get more complex and expensive.

The National Renewable Energy Lab suggests that there are practical limits to merging large amounts of variable, renewable energy onto a power grid. After reaching approximately 30 percent of overall power generation, system disruptions set in.

The problem is managing the peaks and valleys of wind and solar output. As states add more and more weather-dependent wind and solar to the grid, the distance separating their peaks and valleys is going to grow increasingly wide. Reliability and logistical challenges will grow in tandem. Balancing the grid, and maintaining a reliable flow of power, will require backup, dispatchable power from coal and natural gas plants. But it will also demand massive transmission investments. Grid operators will need to be able to move power across large swaths of the country — to fill gaps when the weather doesn’t cooperate. That’s not feasible with America’s existing grid.

Wood Mackenzie, an energy consultancy, has estimated that the renewable build-out envisioned under the Green New Deal could necessitate the construction of some 200,000 miles of high-voltage transmission lines. The basics of it, including transmission infrastructure, could cost roughly $4.5 trillion. Those costs will end up in electricity bills that a third of Americans are already struggling to pay.

Policymakers at the state level and in Washington urgently need to consider the hurdles ahead for America’s power grid. Yes, the sticker price for wind and solar power has fallen significantly. But that’s only part of the story. The cost and complexity of integrating their power is growing. And a balanced, truly all-of-the-above energy strategy — one that doesn’t sacrifice affordability and reliability — is the right path forward. 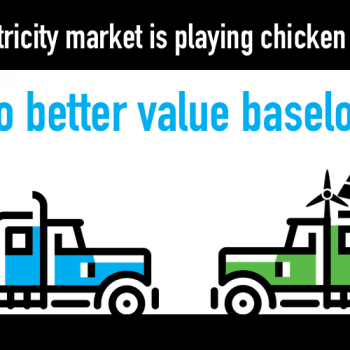