If you’re in the grid reliability business, the New England grid is a problem most don’t want to touch with a 10-foot pole. New England’s challenge is two-fold.

First, the region has retired nearly all of its baseload coal capacity and much of its nuclear power capacity. New England has put all its eggs in the natural gas basket and the lack of fuel diversity and overreliance on just-in-time fuel delivery through an overstretched pipeline network has manifested into a mounting crisis.

Second, as ISO New England, the region’s grid operator, explored its deepening fuel security problem, it realized that it’s market construction – which was supposed to ensure fuel security and grid reliability – isn’t up to the task.

In recent a study, ISO New England discovered a “misaligned incentives problem” in the very DNA of its market. The authors of the study found that what’s good for the reliability of the system, what is cost-effective and necessary to ensure system reliability, is not viable or incentivized for power producers. It’s like the engineers of the Titanic discovering the ship’s design is deeply flawed after already hitting the iceberg.

With the region’s coal capacity gone, New England has no dispatchable fuel optionality when temperatures drop and natural gas demand soars for home heating. What fuel is left over for electricity generation is hardly cutting it. In fact, ISO New England warns that 30% of its natural gas generating fleet could be without fuel on particularly cold days—that’s capacity on which several million homes depend for power.

Politico reported that, “The new proposal from ISO-New England, to be filed Oct. 15, outlines the opening parameters to increase compensation for ‘fuel secure’ plants in the region. The plan would expand the grid operator’s day-ahead market to six days and include new payments for ‘reserve services’ — plants with onsite fuel supplies that can be called upon in times of grid stress.”

What ISO New England is proposing is precisely what Secretary Perry and the Department of Energy have been pushing to address what they feel is a deepening, widespread grid reliability challenge infecting multiple regional grids. While DOE’s effort was rebuffed by FERC, with a call for increased study of the issue, it’s now proving prescient.

A Call to Action

New England’s scramble isn’t just a New England problem. As other grids slip into deeper and deeper reliance on natural gas, the very reliability challenges that are proving so dicey for ISO New England are likely to emerge in other parts of the country. As The Wall Street Journal has reported, despite surging natural gas production, the pipeline network to move that gas from areas of production to areas of demand is not keeping up. And yet, the shift to gas away from baseload coal and nuclear power continues apace.

It’s likely that the “misaligned incentives” problem buried deep in ISO New England’s market structure is lurking inside other regional markets. Existing dispatchable fuel diversity is masking it for the time being but as more coal and nuclear capacity is pushed into premature retirement, grid operators may soon find themselves with the very fuel security problems ISO New England is doing magic tricks to manage.

Despite clear warnings from DOE and grid reliability experts that the loss of fuel-secure, baseload power poses a significant reliability challenge, other regional grids aren’t moving with the necessary urgency. Recall that earlier this year four utility executives wrote to PJM Interconnection, the market organization that supplies power to 65 million Americans in 13 states and the District of Columbia, pleading for market reform to better value baseload capacity and the resiliency those plants provide the grid. They explained that PJM’s incremental efforts to reform pricing in the energy market have fallen short of the “fundamental changes that are needed to support baseload electric generator units over the long-term.” They warned that “PJM has not taken the proactive steps needed to value resiliency attributes, such as fuel security and fuel diversity, of its generating fleet.”

The time is now for decisive action to address the loss of baseload capacity and to sure up grid reliability while fuel diversity still exists on the majority of the nation’s regional grids. New England’s crisis is a warning that should come through loud and clear. Blindly counting on the market to address fuel security and preserve fuel diversity is a recipe for disaster if the market is incapable of doing so. ISO New England has learned that the hard way. If FERC and other regional grids kick this can down the road they too will be left saying “abracadabra” to keep the lights on. 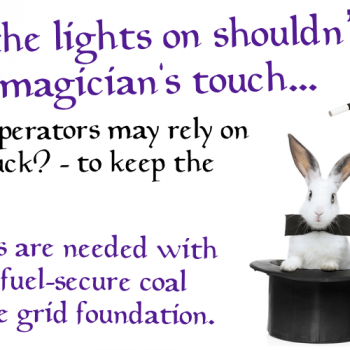