Is there any chance environmentalists will recognize the humanitarian imperative of using fossil fuels? Certainly not, if climate activists cling to the notion that carbon taxation must be a top priority in the presidential race.

It’s a sign of our disordered political times that 11 Democratic Party presidential hopefuls have endorsed the Green New Deal, a climate resolution calling for a national mobilization against fossil fuels at a cost estimated as high as $93 trillion.

Environmentalists who will make up an important part of the troops on which the Democratic Party is relying in its effort to defeat Trump maintain that a combination of conservation and renewables alone will be enough to meet America’s energy needs.

But there’s a small problem: Fossil fuels account for more than 80% of the energy consumed in the United States, and it will likely remain that way for at least the next quarter century. According to government statistics, solar and wind combined supply less than 10% of the nation’s electricity. What happens if many more fossil fuel plants are shut down and voters quickly get a lesson in what renewables can’t do?

Based on past experience, Americans have a justified predisposition to believe the worst of government programs. We relish horror stories such as Solyndra, which went bankrupt in 2011 and left taxpayers liable for more than $500 million in federal guarantees. This inclination spares us from rushing headlong into a regulatory scheme limiting the use of fossil fuels and carbon pricing. Giving a government regulatory agency the power to control the amount of coal, oil, and natural gas we’re allowed to use to run our factories and power our homes and cars may sound smart to environmentalists, but the cost in dollars and forfeited jobs would be enormous. Our economy would be shackled with huge, growth-killing costs.

Climate action is not likely to resonate politically with voters. We saw this in the midterm elections. For example, Washington state voters rejected a carbon tax that would have required them to pay $2.3 billion in additional taxes over five years.

A common response from Americans, even from those who want to see a reduction in greenhouse gas emissions, is that much, if not most, government spending is a complete waste, doing nobody any good. In fact, none of the industrial countries that are parties to the Paris accord have come close to meeting the carbon reduction pledges called for.

To the extent that carbon taxes or government regulations do nothing except subsidize green tech, it’s just that sort of approach that would turn into a train wreck. Besides, most people don’t see how carbon mitigation would affect their lives. Quite simply, there’s a disconnect between middle-class voters who are quietly living month-to-month and climate change advocates who are viewed as elitists concerned about the Paris accord and the future effects of global warming. That’s the political wall the greens have smashed into.

Basically the same story applies at a global level. Consider that in one country after another, from Australia, to France, the Netherlands, and Canada, parties pushing green energy, the Paris Agreement, and carbon pricing have been defeated at the polls. The same is likely to happen here at home if the Democrats push for either a carbon tax or the Green New Deal, or both.

It is bad enough for a government measure to be inordinately expensive or to be ineffective — it certainly shouldn’t be both.

Driving Up the Cost of Power for Consumers 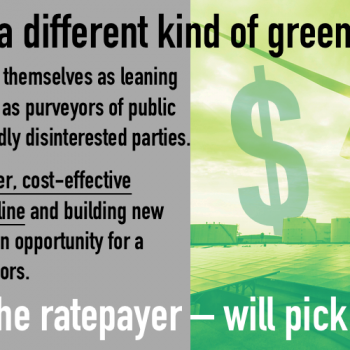 Mike Bloomberg Reignited the War On Coal. West Virginia Isn’t Going Down Without a Fight