Utilities Warn of Threat to U.S. Power Grid with Shift Away from Nuclear Energy and Coal

Utilities Warn of Threat to U.S. Power Grid with Shift Away from Nuclear Energy and Coal

Via The Memphis Commercial Appeal:

What’s more valuable: a brand new sports car or an old sedan? Obviously, the sports car. But what if that sports car has an empty gas tank? Suddenly, the perspective changes. Yes, the car may be “valuable,” but it’s not “useful.”

It’s a simple analogy. But what if we extend the comparison to coal and natural gas power plants?

Over the past decade, the United States has been transitioning its electricity production from coal-fired plants to natural gas and renewable energy. Since 2010, roughly 40 percent of America’s coal fleet has been shut down or designated for closure. That’s enough power generation for 40 million homes.

Like a car with a full tank of gas, coal plants store on-site fuel supplies. That allows them to run non-stop for months at a time. Unfortunately, natural gas plants and wind farms don’t have the same capability — and some industry experts are growing concerned.

In January, the heads of four major U.S. utility providers sent a letter to PJM Interconnection, the regional transmission organization for 14 states. They urged PJM to reassess the value of coal and nuclear plants in America’s power grid.

Why the concern for coal and nuclear power? These executives are responsible for delivering non-stop electricity to millions of customers in the United States. And they’re growing worried that a lack of “fuel security and fuel diversity” could limit overall electricity production.

Going back to our car analogy, the utility executives are saying that a full tank of gas matters, and that PJM and other regional transmission organizations should emphasize stable baseload power generation.

They’re not the only ones worrying, either. The North American Electric Reliability Corporation (NERC) recently cautioned that a rapid shift to renewables and natural gas “could leave the bulk power system vulnerable to fuel delivery risks in areas where firm pipeline service is not procured.”

Here’s their concern: Gas-fired power plants depend on a continuous flow of fuel from a complicated national pipeline system. But those pipelines can quickly reach their limit during periods of high demand. During January’s “Polar Vortex,” utilities in Michigan, Minnesota, and Rhode Island urged consumers to lower their thermostats to avoid power outages.

The problem may be particularly acute in the Northeast, where natural gas is the dominant fuel source for electricity generation. ISO New England just announced that the region’s “constrained fuel delivery infrastructure”—gas pipelines—could lead to “insufficient energy available” during cold winter conditions.

Thankfully, coal provided a safety valve. During the Polar Vortex, U.S. coal plants stepped up to deliver much-needed electricity. However, many of these same coal plants are now on the chopping block.

What keeps energy executives up at night is the possibility that a hasty dismantling of coal and nuclear power plants could sleepwalk the U.S. into a silent crisis.

Undoubtedly, natural gas and renewables are gaining prominence. But the United States has massive energy demands, and it makes sense to keep all options on the table. Alongside natural gas, wind, and solar, the U.S. must retain the sturdiest forms of electricity generation — coal and nuclear. 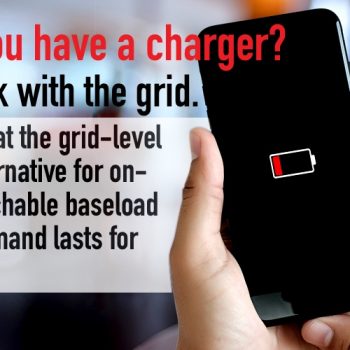