Perry Says He’s ‘Thrown a Lot of Jello at the Wall,’ on Coal, Nuclear Closures

Perry Says He’s ‘Thrown a Lot of Jello at the Wall,’ on Coal, Nuclear Closures

More than a year after Perry was shot down by the Federal Energy Regulatory Commission on a proposal to increase wholesale power rates for those plants, the former Texas governor said the grid is becoming too reliant on natural gas.

“Gas is cheap right now, but gas is interruptibility,” he said, referring to potential pipeline disruptions. “How do you make sure you have [a reliable power supply with coal and nuclear], I’m open for conversations. I’ve thrown a lot of jello at the wall on this one.”Perry argues coal and nuclear plants are less susceptible to cyber and physical attacks because, unlike natural gas-fired plants, they store fuel on-site, a claim criticized by a broad coalition of American industries as a ploy to prop up a coal industry President Donald Trump championed on the campaign trail.

The statements by Perry at a press conference in Houston followed a speech earlier Wednesday at the CERAWeek by IHS Markit conference, in which the energy secretary laid out his vision for “the dawn of the new American energy era.”

He said the country needed to focus on innovation over regulation, rebuffing calls for government action to cut reliance on fossil fuels. He recalled how foreign ministers who had pressured him to try to stop Trump from pulling out of the Paris climate accord were the same ones looking to buy U.S. liquefied natural gas.

“We would go into the (bilateral discussions) and they would say how buying some of that LNG you guys got,” he said.

Expanding U.S. energy exports has become a focus of the Trump administration, using the nation’s booming oil and gas production to not only grow the domestic economy, but to pressure rivals like Russia and China. He echoed Secretary of State Mike Pompeo, who spoke at the conference Tuesday, touting U.S. oil and gas production as counterweight to nations that would used energy for “malign ends.”

“We’ve got more than enough energy to share with the world, and with that energy comes freedom of choice for countries around the world,” Perry said.

Perry has spent much of the week at the CERA conference meeting with foreign energy ministers from around the world, a role he relishes, describing himself as the American energy sector’s top salesman.

On Thursday, Perry recounted how years ago when his daughter was in elementary school she was asked what her father did for a living.

“She looked them in the eye and deadpanned, ‘He talks,'” Perry said.

A Solution in Search of a Problem 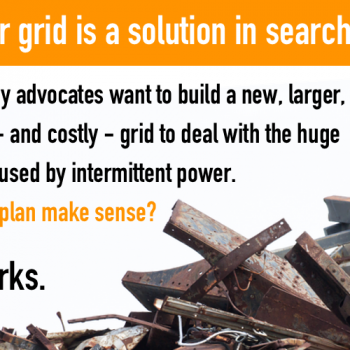