“Advancing the development of clean coal technologies is an important part of President Obama’s strategy to develop every source of American energy and ensure the United States leads the world in the global clean energy race and continues to take advantage of domestic resources here at home,” said U.S. Energy Secretary Steven Chu, 2012

Indeed, one of the great myths in our ongoing energy-environment discussion is that only renewable energy systems are evolving. The reality, of course, is that fossil fuel-based technologies are constantly improving as well. Our use of fossil fuels is always becoming more efficient with systems needing less fuel (feed) to generate more energy and becoming cleaner by emitting less greenhouse gases.

Perhaps coal is the best example of this fact

The truth is that coal technologies continue to get better. To those of you that deny this, a title says a lot: energy adviser to the rich OECD nations, the International Energy Agency (IEA) houses a Clean Coal Center.

To reach environmental goals, IEA highly promotes what it dubs “High Efficiency, Low Emission” (HELE) advanced coal technologies. These are state-of-the-art supercritical and ultra-supercritical coal plants that can cut CO2 emissions over older plants, for instance, by 40% or more.

In “Outlook and Benefits of An Efficient U.S. Coal Fleet,” leading researchers at Wood Mackenzie recently concluded that we have significant opportunity for HELE deployment here in the U.S. Others are quickly outpacing us in this critical arena. Under 30% of U.S. coal plants utilize HELE technologies, well below 66% in China, over 70% in Western Europe, and about 75% in Japan.

Regulatory barriers that make upgrading America’s coal fleet to higher efficiency levels extremely expensive are a main reason why our fleet has fallen behind.

In November, Sen. Todd Young (R-Indiana) introduced the Reinvigorating American Energy Infrastructure Act to encourage better adoption of HELE advanced coal by expanding loan opportunities. As seen in the graphic below, far more than is being claimed, there is still solid support for coal in America. Per polling from Morning Consult just a few weeks ago, this is mainly based on the desire for a reliable, affordable, and diverse electric power system that coal helps install.

Coal, of course, is not “dead” here in the U.S. but still a major energy source: supplying 28% of all U.S. electricity last year. And coal plants are called on most in times of extreme cold like we saw this past week. The resiliency that coal supplies the power system in these tough times has been proven time and time again.

Coal is not going back to its glory days of just 15 years ago, when it was over half of all U.S. power, but it is hardly in freefall either. The U.S. Energy Information Administration’s just released Annual Energy Outlook 2019 sees coal still supplying 25% of power in 2030, more than all renewables put together.

But coal’s contribution could ultimately be higher than that. Coal will gain from Deep Electrification efforts that will surely mean more power demand, and any increase in gas prices, battery storage not evolving as claimed, and as related, intermittent renewables failing to deliver as promised would all help coal’s chances. In fact, these potentials to lift coal are precisely why the Wood Mackenzie report delineated strategies to “foster” HELE deployment in the U.S.

Indeed, I personally believe that future U.S. electricity demand is being greatly underestimated, which underlines the importance of all-of-the-above energy strategy. IEA has told us repeatedly that U.S. energy policy must be practical: simply relying on intermittent wind and solar to reduce emissions will not get the job done.

Globally, coal supplies a leading 40% of all electricity, and is particularly vital to the energy-deprived poor countries that require low cost power. Measured in the billions of humans without proper access, the world is simply too energy short to take coal completely off the table. Former World Bank President Jim Yong Kim knew this, and called such needless suffering of the world’s poor “energy apartheid.” Being practical, he seeks a key role for more advanced coal:

Research and investment into making coal cleaner is essential to our global goal of economic development and a cleaner environment. Evolving technologies, not incessant regulation, is the solution. Again, widely supported by President Obama, U.S. research in this space is very important because we can export cleaner HELE technologies to gain economic partners while also cutting emissions: “The United States As A Clean Coal Leader.”

HELE is the first step to an imperative emission reduction strategy for coal that focuses on carbon capture and sequestration (CCS), a maturing technology to capture CO2 before its released into the atmosphere and then stored safely in the ground. CCS is supported by the Intergovernmental Panel on Climate Change, the global authority. IEA consistently points out that without CCS reaching climate goals will costs trillions of dollars more, if they are even achieved at all.

According to IEA, “Combined with CCS, HELE technologies also can cut global average CO2 emissions from coal plants by as much as 90 percent.”

As CCS systems continue to evolve, some good news that we all should celebrate: “Strong year for CCS at Boundary Dam power plant.” 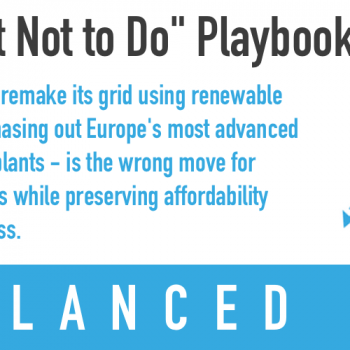