A Timely Reminder of the Essential Value of Coal Power

A Timely Reminder of the Essential Value of Coal Power

Via The Exponent Telegram:

Weather can be unforgiving. And the nation’s latest turn with the “polar vortex” was a reminder of just how merciless it can be.

With temperatures across much of the country dipping well-below zero, our energy systems, particularly the electricity grid, were pushed to the limit. Once again, coal power plants came to the rescue to ensure the lights stayed on.

The shift away from coal to other fuels in the past few years has raised red flags that we may be trading reliable, secure and affordable energy for an altogether less reliable and affordable future.

While the warning signs are ever present, extreme cold has a way of shining a spotlight on the cracks now spreading through our energy system.

Increased reliance on renewable sources of energy, like wind and solar, that are dependent on the variables of the weather, along with an overreliance on natural gas plants (which rely on just-in-time fuel delivery), are reasons for deep concern.

In Chicago — the “Windy City” — the bitter cold forced operators to power down wind turbines. Among other problems, frigid temperatures can cause the turbines to crack.

In Michigan, a fire at a natural gas compressor station prompted the governor to beg consumers to reduce natural gas usage, fearing there simply wasn’t enough to go around on the coldest day of the year.

Despite these close calls, this time the grid pulled through. Coal plants, which typically have months of fuel stored on site, were able to ramp up their electricity generation.

In two of the regional grids most affected by the extreme cold, coal plants provided about half of the electricity needed at the height of the crisis. On a normal day, they supply about a third of those grids’ power needs.

This wasn’t the first time our coal plants have stepped up when other sources of energy couldn’t. In January of 2018, in the nation’s largest grid with 65 million customers, coal provided most of the increased supply of power during periods of peak demand during the “Bomb Cyclone” that hit the eastern U.S.

Not only did coal pick up the slack, it had to. With home heating demand soaring, natural gas supplies couldn’t keep up. Half of the grid’s total natural gas capacity was not available to meet peak power demand 7, 2018.

These bouts with extreme cold are a timely reminder of the value of a balanced electricity mix and the need to preserve our baseload, fuel-secure, coal-powered generating plants. But that balance is slipping away as coal plants are forced into early retirement due to markets that aren’t adequately valuing the reliability and resilience they provide to the grid. The time to act is running out.

An all-of-the-above energy strategy should be far more than a slogan. We need all the tools at our disposal to meet the energy challenges ahead.

A future without essential, reliable and affordable coal-generation would be a disaster of our own making.

Power Grid Serving 65 Million May Be at Risk in East, Midwest 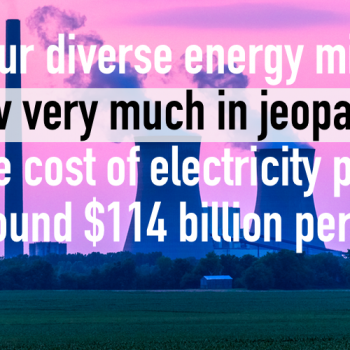