Energy Secretary Rick Perry spoke with top energy security officials Tuesday as a deep freeze gripped the eastern half of the United States.

Perry tweeted that he received an update from Karen Evans, the assistant secretary of the Office of Cybersecurity, Energy Security, and Emergency Response, known as CESER, on the department’s readiness to “respond to the polar vortex hitting the country from the Midwest to the East Coast.”

The CESER office was set up on Perry’s watch to coordinate the federal government’s response to major power outages due to extreme weather events, in addition to potential cyberattacks on the nation’s grid by nation states and other bad actors.

The Washington metro area is heading into several days of very cold temperatures as cold polar winds extend eastward across the nation, which could place strain on the electric grid, natural gas, and heating oil as demand for heating rises in one the most densely populated regions of the nation.

Coal use will likely see a rise in the electric grid system operated by PJM Interconnection, a public utility regulated by the federal government that serves 13 states and Washington.

PJM says it can withstand an extended period of stress while remaining reliable. “Even in an extreme scenario, such as an extended period of severe weather combined with high customer demand and a fuel supply disruption, the PJM system would still remain reliable,” it said in a resiliency report issued in November.

The administration had used previous extreme cold, such as the 2014 polar vortex and last year’s historic bomb cyclone as reason to incentivize coal power plants, as natural gas-fired electricity plants now provide the bulk of the nation’s power.

Coal use does increase during extreme cold weather because the huge surge in sustained demand makes them more economic. In last year’s cold weather, for instance, coal-fired electricity did surpass natural gas for a short period of time, according to PJM data.

Balancing the Grid and Reducing Emissions with Advanced Coal Technology 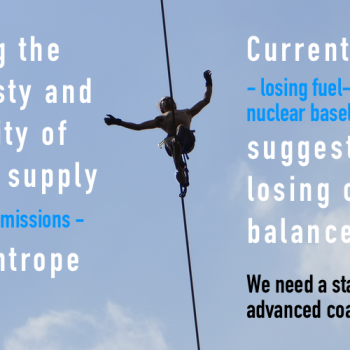