One of the lesser known economic successes of the modern era is the U.S. electric grid. For the most part, enough electricity-generating capacity to meet the nation’s power needs is available at the flip of a switch. America’s power plants continue to perform at high levels of safety and reliability. The reason: A diverse mix of fuels and technologies — coal, natural gas, nuclear power and renewables — serves as a hedge against price volatility and supply disruptions.

But serious stresses are building below the surface, threatening one of the industry’s major strengths: Fuel options.

More than 250 coal-fired power plants have closed since 2010, with dozens more expected to be retired by 2025. Several large nuclear plants likewise have shut down.

As utilities continue to substitute natural gas for coal and nuclear power, the nation is becoming more reliant on natural gas for producing electricity, exposing consumers to the possibility of punishing price increases and localized supply shortages.

We’ve already had warnings that gas prices could rise sharply, as the demand for gas increases not only from power generation, but from the industrial sector and from overseas customers for U.S. gas exports, mostly in Europe and Asia. In fact, U.S. gas prices today are more than 63 percent higher than they were a year ago. And energy experts warn that a frigid winter could send prices even higher.

By 2025, between mothballed coal-fired and nuclear power plants, we could see the loss of 100 gigawatts of power — enough to supply 25 million American households. Can we realistically expect renewables to fill that void? As a practical matter, the answer is no.

The declining cost of renewables offers promise, but even with government tax credits and renewable fuel mandates, wind and solar combined supply only 7 percent of the nation’s electricity.

Moreover, despite vast reserves of shale gas, gas price volatility will continue. The prices of commodities like natural gas fluctuate up and down sharply because neither consumers nor producers can respond quickly to changes in market prices. Small shifts in supply availability therefore can cause dramatic price swings.

The North American Electric Reliability Corporation, or NERC, “warns that an accelerated retirement of coal-fired and nuclear power plants over the next several years could lead to power outages, temporary shortfalls in surplus generation and transmission problems in several regions.” In New England, which has seen some close calls during bitter cold weather already, the abandonment of coal generation is troubling. ISO New England, which oversees the northeast’s electric grid, says that the retirement of 4,500 megawatts of remaining fossil fuel power by 2025 could result in days of “load shedding” or rolling blackouts.

The perception is widespread that grid operators’ management practices and market mechanisms will compensate for power plant losses. But NERC cautions in a recent report on electricity reliability that it can take five years or more to replace lost generating capacity. Closer examination of some electricity markets — such as the 12-state PJM (Pennsylvania, Jersey, Maryland) grid that extends from the mid-Atlantic to the Midwest — shows that, owing to long lead times for building new power plants, markets can account for capacity needs only three years in advance.

Public regulation adds an additional layer of complexity to the problem of vanishing generating capacity. While wholesale electricity prices generally are free to move up and down in response to market forces, the prices of electricity at the retail level remain subject to binding regulatory caps in many parts of the country. When wholesale prices spike, the prices paid by consumers do not rise immediately. What this means is there’s little incentive for consumers to conserve power when the cost of supplying them climbs.

In the event electricity generating capacity can’t meet customer demands, public utilities have one only option: Cutting the amount of power supplied, creating “brownouts” or “blackouts.” That’s exactly the situation today on the PJM grid. Consumers there are being exposed to risks that are completely unnecessary and avoidable.

But it’s the price they may have to pay as we rush to embrace green energy while waging war against coal and turning our backs on nuclear power.

The Energy Tax Revolt is Worldwide 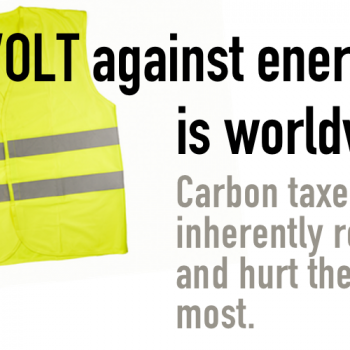