Via The Craig Daily Press:

Trapper Mine is a good neighbor, and it has the award to prove it.

The Office of Surface Mining Reclamation and Enforcement in August awarded Trapper Mine the Good Neighbor Award, which is given to mines for outstanding commitment and innovative in mining and reclamation practices. It is an award the mine is proud to receive, Trapper Mine General Manager Michael Morriss said.

The mine has a history of receiving awards, such as the Sentinel of Safety Award, which Morriss described as the “Stanley Cup” of mine safety awards and the highest honor any mine can receive for safety.

The Good Neighbor Award, he added, isn’t handed out lightly.

“It’s an award that acknowledges our reforestation efforts and community efforts,” Morriss said.

But Trapper’s contributions to the community go far beyond that.

Employees and mine administration have been involved with building a soccer field, sponsoring Loudy-Simpson Park, working with the Moffat County United Way on improvement projects, and taking a leading role in other efforts to improve the community, Morriss said. He added he is very proud of the mine’s efforts.

National Mining Association president Hal Quinn said Trapper’s efforts demonstrate its sustained commitment to environmental stewardship, as well as its mission to provide the nation with the affordable, reliable energy needed for growth.

“This recognition is well-deserved,” Quinn said. “It is a testament to their relationship in sustaining a great legacy.”

Trapper Mine administrators were invited to Washington D.C. to receive the award in late September. Morriss added that is the first national award the mine has received since he became manager about a year and a half ago.

Aside from the award, the mine continues to perform well, overall.

Morriss said 2018 production was up by 2.2 million tons, leading to the hiring of 25 new employees. Jobs are posted fairly regularly, he added, many of them mechanic jobs with good benefits. About 200 employees currently work at Trapper.

The mine has also made strides in terms of employee safety, improving its three-way radio communication system and giving employees more detailed briefings about their jobs. Morriss said the mine is dedicated to promoting a culture of safety.

The mine purchased a new excavator earlier this year, which has improved efficiency by about 45 percent, Morriss said. He added Trapper is continually exploring other means of improving efficiency without risks to employee safety.

Trapper Mine currently has a coal contract with the Craig Station that will end in 2020.

A Timely Reminder from Chairman Chatterjee 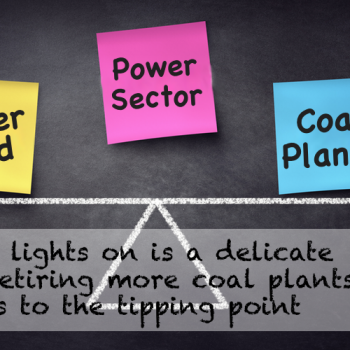