While it is unlikely that coal production in West Virginia will ever compare again to those levels that were recorded during the industry’s heyday, there is still hope for the future.

There are more coal miners working today in southern West Virginia than there were just a few years ago. Coal production levels also are increasing. The optimism we are seeing right now in the deep south counties is reflected in a newly commissioned report on the economic impact of coal on West Virginia.

The Coal Forum, a Charleston-based coal lobbying group, released a report last week entitled  “The Economic Impact of Coal in West Virginia.” The study was completed by the Bureau of Business & Economic Research at the West Virginia University College of Business and Economics under the direction of John Deskins.

According to the commissioned study, coal mining and coal-fired electric power generation totaled some $12.9 billion in economic activity in 2017 with the state’s gross domestic product being approximately $77 billion. Additionally, direct mining operations employed 13,000 miners who earned over a billion dollars annually, the Register-Herald in Beckley reported.

The study also found that coal production in the Mountain State increased 16 percent in 2017 from 80 million short tons in 2016. Of course that figure is still far shy of the 158 million tons of coal that was produced in the state in 2008 before the beginning of the Obama administration.

That is, of course, to be expected given all of the jobs in the coal mining industry that were lost during the eight years of the Obama administration. The industry is rebounding, but it is unlikely that we will see post 2008 production levels anytime soon.

Still, the news is good regarding those existing industry jobs. The average salary of a coal worker in 2017 was $85,000 a year, the study found. 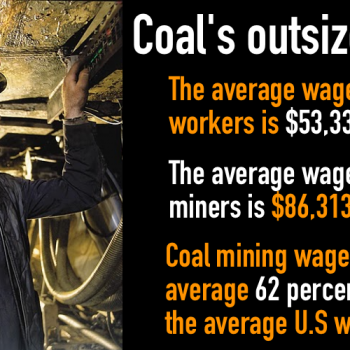