Via The Omaha World-Herald:

As Secretary of Energy Rick Perry prepares to sign off on a plan to save financially distressed coal and nuclear plants, one of the recurring enigmas is why it’s taken so long to recognize the need for reliable base-load electricity production. Consider the importance of base-load power in Nebraska. We would be in serious trouble without a steady supply of power around the clock, especially in the summer months.

According to the Energy Information Administration, Nebraska obtained about three-fifths of its net electricity generation from coal, about one-fifth from nuclear power, and nearly all of the rest from renewable resources, mostly wind and hydropower in 2017.

Further, Nebraska is among the top 10 states in per capita energy consumption because of its energy-intensive industrial sector, led by agriculture, food processing and chemical and machinery manufacturing. Finally, Nebraska has the third-highest number of industrial electricity customers of any state, and a significant share of Nebraska’s industrial consumption is seasonal demand from farmers to run irrigation systems.

Unless we have a diverse mix of energy sources — and are not reliant on a single fuel for electricity that lights and cools our homes, keeps businesses open and powers our industries — we place our economy and our very well-being at risk. As coal and nuclear plants around the country have closed in the face of cheap natural gas — and, in the case of coal, excessive environmental regulation — legitimate concerns have risen over the loss of dozens of power plants that undergird the nation’s electric grid.

Since 2010, electric utilities have decided to shut down more than 100,000 megawatts of coal power, and another 17,000 megawatts are expected to be lost by 2020. Also, several safe and efficient nuclear plants have been shuttered prematurely and others will be if something isn’t done to prevent that from happening.

Fortunately, Secretary Perry recognizes the critical importance of maintaining electric grid stability, even if it requires government action to achieve it. Perry has spoken about the need to keep coal and nuclear plants on line and to establish an electricity reserve that could be tapped in an emergency. Secretary Perry’s action has the support of a broad coalition of industry, government and military experts who all agree that premature closing would pose a significant national security threat.

We need to prepare for the unexpected, and Perry’s plan to prioritize coal and nuclear power would limit our vulnerability to an electricity shortage. There are many reasons the government needs to take steps to save baseload coal and nuclear power. Providing financial relief to these plants would have little impact on current prices, and in fact would provide insurance against extremely high electricity prices if something unexpected were to happen to the supply of natural gas. This plan would help prevent brownouts and cascading blackouts, and save plants that provide enough energy to power more than 80 million U.S. homes.

The alternative is to continue nibbling at the edges of the problem and simply delay the inevitable. That might work for a while. But if coal and nuclear plants begin to close in Nebraska and adjoining states, there would be price fluctuations, higher power bills, negative impacts throughout the economy, and financial harm to communities where the plants are located. That is not a future Nebraskans want.

One Retirement Too Many

The EVs Are Coming 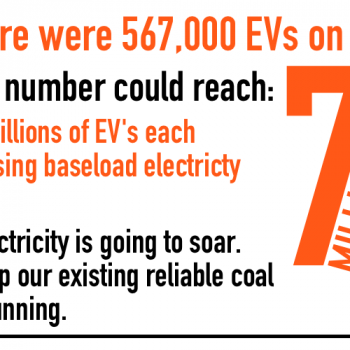