Let’s Not Get Rid of Coal Power Just Yet

Let’s Not Get Rid of Coal Power Just Yet

Via The Clarion Ledger:

In the face of rising electricity demand, Energy Secretary Rick Perry recently unveiled a plan to preserve some of the nation’s key coal and nuclear power plants. It’s a sensible move since the nation’s power grid can’t rely solely on natural gas, wind, and solar.

What America’s families and businesses need is a diverse mix of energy sources as a hedge against unexpected changes in energy cost or availability.  And since it’s important to protect consumers from high energy costs — and to keep the nation’s power grid running—it’s important to avoid the premature retirement of coal and nuclear power plants.

Because the shale revolution has produced a rapid supply of inexpensive and relatively clean natural gas, we are becoming increasingly dependent on it for most electricity production. Consequently, we risk losing the energy diversity that has long served as a bulwark of the U.S. energy system. The problem may be an eventual lack of robust competition. One can even ask, “What will be the cost of natural gas when it is our only major source of electric power?”

On the other hand, while coal is not our cleanest fuel, it is the least expensive and most abundant. It would be easier if a goal were set to improve the efficiency of these power plants, with the use of advanced coal technologies — including the ultra-supercritical pulverized coal process already in commercial use. That would cut power-plant emissions from coal, and promise even greater reductions in the years ahead.

For countries like China and India, whose economies are based on coal, advanced coal technologies could become the energy of choice for many. And don’t count out coal in the United States or Europe, given forecasts that coal will continue to play a major role through 2040 and possibly beyond.

Keep in mind also that Germany, which increased its use of coal following the Fukushima nuclear accident in Japan, is building some of the most advanced coal plants in the world. And as for nuclear power, it’s our only large emissions-free energy source. But new, large nuclear plants can take too long to build, so existing plants need to stay online as long as feasible. In addition, a new generation of small modular reactors are on the horizon. They can be built in less time and at a fraction of today’s cost.

But what about popular renewables such as wind and solar?  These can be helpful, but currently, provide about 8 percent of our electricity. And they work only when the wind is blowing or the sun is shining.

Thus, wind and solar only provide energy about 30 percent of the time. For comparison, nuclear plants are “on line” some 90 percent of the time, with coal and gas in the 60-70 percent range. As a result, backup power from natural gas, nuclear, or coal are needed to ensure a steady stream of electricity when wind or solar are used. But costly taxpayer subsidies are also needed for most renewables.

The bottom line is that we need all of our tools in the competition for safe, inexpensive, and reliable energy. And, we certainly can’t stand by while coal and nuclear, which provide 50 percent of our power generation, begin to leave the playing field. 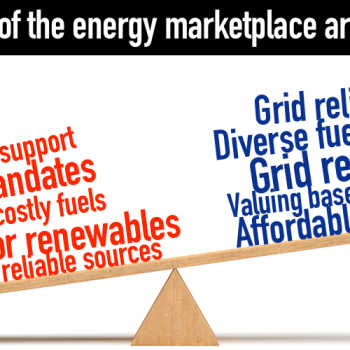