Few American business sectors get as strong a defense from President Trump as the coal industry, both in his rhetoric and his policy.

As a presidential nominee, he repeatedly pledged to work to revive coal’s fortunes, presenting himself as the “last shot for the miners.”

“They want to be miners, but their jobs have been taken away,” Trump said at an August 2016 rally. “And we’re going to bring them back, folks.”

Trump and his team, particularly Environmental Protection Agency chief Scott Pruitt and Interior Secretary Ryan Zinke, have sought to follow through on that promise, repealing a rule meant to protect streams from coal mining waste, ending a moratorium on new coal leasing on federal land and beginning to roll back the Clean Power Plan.

Trump boasted in his State of the Union address in January that he had “ended the war on beautiful, clean coal.”

Hal Quinn, president of the National Mining Association (NMA), says his group’s aggressive work during and since the campaign fed into Trump’s pro-coal policies. But Quinn, who has been coal’s top spokesman in Washington, D.C., for 10 years, acknowledges that Trump and the people who work for him were likely to go in that direction anyway.

“Frankly, we’re dealing with folks whose interests for the country, we believe, are much more aligned with our interests, which is: Let’s encourage investment; let’s use our energy resources as responsibly as possible for the benefit of the public as well as the world; let’s use our metals and minerals resources as well so we’re less dependent on foreign sources,” Quinn, 62, said last week from his office less than a block from the Capitol.

“Their focus is very much aligned with us and what we contribute to the country and society,” he said, arguing that the mining of coal, metals and minerals brings the U.S. cheap energy and commodities that fuel the economy, along with good-paying jobs and other benefits.

That’s in sharp contrast to former President Obama. He and his staff used numerous tactics to crack down on coal’s greenhouse gases, toxic air emissions, impacts on streams and worker health issues.

NMA spent $1.9 million lobbying Congress and the executive branch last year, a significant increase from the $1.3 million it spent in 2016, according to figures compiled from disclosures by the Center for Responsive Politics. The 2016 total was the lowest since 2000, however.

Quinn admits that, like many watching the 2016 election, he didn’t expect Trump to defeat Democratic nominee Hillary Clinton, but says he knew the pollsters didn’t have the full story.

“You just knew there was something there, that it wasn’t going to be a runaway,” he said.

Nevertheless, Quinn snapped into action with plans to take full advantage of Trump’s victory and the GOP’s control of both chambers of Congress, with the help of NMA’s three dozen or so employees and 200 members.

The plan included pushing for lawmakers to invoke the little-used Congressional Review Act (CRA) to quickly overturn some key Obama administration regulations with a simple majority vote in the Senate.

“What we did, in terms of our approach after the election, is we got quick consensus with the membership of what our priorities would be, we developed strategies for advancing those, and execution of that strategy was key, not only by our team here, but by our members,” Quinn said.

“And we think we’ve been very successful doing that, because we think we had great opportunities that we seized in a very deliberate manner,” he added.

Two of NMA’s priorities were to use the CRA to repeal the Interior Department’s Stream Protection Rule and the Bureau of Land Management’s Planning 2.0 rule, both of which were accomplished quickly.

That, Quinn said, freed up federal agencies to work on more time-consuming repeals, such as the Clean Power Plan.

“It was a pretty deliberate process of engaging with the administration, who has people in it that I think have a better understanding about connecting the dots.

“Because if your agenda is to foster economic growth and create jobs and preserve high-wage jobs, I think we had a very compelling story to tell,” he said, surrounded by photos from mines and scale-model toys of the massive equipment used for mining.

He first came to Washington in 1980 as a Labor Department attorney fresh out of law school at Wake Forest, working on mine safety and health litigation.

He then shifted to the Interior Department, again litigating, before leaving the government to work at what was then the Mining and Reclamation Council.

That group became the National Coal Association in 1987, which merged with the American Mining Congress in 1995 to form the National Mining Association, of which Quinn became president in 2008.

For Quinn, the biggest change to watch has been the increasing polarization of many policy areas, particularly in coal.

“You had a strong core segment of coal supporters in the Democratic Party, beyond just coal-producing states,” he said.

“And there was a real appreciation for the value of coal as it relates to affordable, reliable electricity and energy, particularly in the Midwest and West as well.”

Quinn attributed the shift to differing views on what to do about issues like pollution and climate change.

Quinn and his staff are well aware that coal isn’t the most popular power source among Americans.

That, among other factors, has fueled significant backlash to the Trump administration’s environmental policy.

Gallup found in March, for example, that 62 percent of Americans think the federal government isn’t doing enough to protect the environment, the highest share since 2006.

“The Trump era has been very friendly to billionaire corporate interests that are looking out for themselves, and that is certainly what the National Mining Association represents,” said Mary Anne Hitt, director of the Sierra Club’s Beyond Coal campaign, which works at numerous levels of government and business to reduce the production and use of coal.

“In my view, it’s a trade group for billionaire coal executives who are trying to avoid being held accountable for their pollution and their workplace safety violations,” she said.

Quinn knows coal’s role in polluting the air and water. But he argues that the industry can be part of the solution, with the right government policies in place.

“The coal-fired utility industry has done a remarkable job in terms of decreasing the emission rate by 95 percent,” he said of criteria pollutants, the common emissions like particulate matter and nitrogen oxides.

As for greenhouse gases, Quinn argues that putting government resources into developing emission-reducing technology like low-emission plants and carbon capture is better in the long term than just shutting down plants.

“Maybe you don’t get the emission reductions up front because you’re developing the technology, but in the end, you have technology that better meets the targets,” he said.

So far, the Trump administration has largely agreed, and is implementing policies both to take down the regulations and to build up the technology, like pushing for more funding for fossil fuel research at the Energy Department.

When It Isn’t the Ships but the Fleet that Sinks 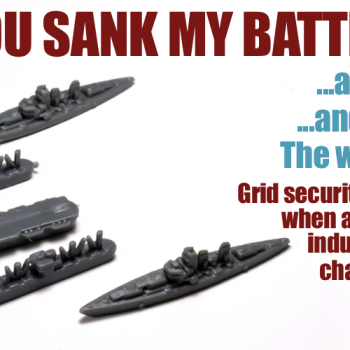