Via The Charleston Gazette-Mail:

It’s no secret that the Sierra Club and Greenpeace oppose coal-fired power plants. And in their newest report they happily cite a gradual decline in global coal plant construction.

But a funny thing about their new report—they’ve inadvertently confirmed the futility of trying to regulate coal-generated electricity out of existence.

In a joint study, the environmental groups report that, in the past two years, new coal plant construction has fallen 73 percent worldwide. It’s a finding consistent with the Global Climate Project’s assessment last year.

But here’s the ironic kicker: the study also notes that coal use is still growing. The London-based World Coal Association estimates that coal consumption grew by 2 percent in 2017, largely because China added 34 gigawatts (GW) of capacity, India added 9 GW, and the rest of the world added another 18 GW. And that “rest of the world” includes comparatively wealthy OECD countries.

In fact, at this point, not one of these advanced industrial countries is even close to meeting its commitment to cut greenhouse gases under the Paris Accord.

World Coal CEO Ben Sporton summarized the situation quite accurately: “Renewables complement rather than displace coal, a trend that we continue to see across Asia.” This happens in part because wind and solar will always require back-up generation from gas and coal plants—for when the wind doesn’t blow and the sun doesn’t shine. Having just completed an inspection of coal plants around the world, Sporton recognizes that advances in wind turbines and solar panels function best when generating power along with coal plants.

Unfortunately, there seems to be a media blackout when it comes to the real, bottom-line facts and figures of global energy production. For example, we often hear that, over the past five years, China has become the world’s leading market for solar and wind energy. But we don’t hear that, over the same period, China has also added 229 GW of coal-fired power.

The Sierra Club and Greenpeace seem more comfortable criticizing the rest of the world for continuing to rely on the coal that supplies affordable, reliable electricity. To the world’s poorest, this criticism must be baffling—if not insulting. The environmental elite appear concerned that the Great Unwashed are jeopardizing global carbon reduction, not that they lack access to electricity. It’s almost comic—the world’s most affluent citizenry hectoring the developing world, insisting that they raise energy costs, slow economic growth, and simply “do without.”

This is not productive or realistic talk. So, instead of calls to keep coal in the ground, it’s time for a far more sensible approach: doubling down on the deployment of advanced coal technologies. This offers at least two advantages.

First, it’s more realistic. The International Energy Agency last week labelled current efforts to reduce carbon emissions as “insufficient to meet the objectives of the Paris Agreement.” Even assuming complete agreement on the timeframe and the cost of weaning huge economies off fossil energy, the carbon reduction goal is unlikely to be met by stubbornly lecturing a coal-using world and denying them clean coal technologies.

Second, the technological approach has already proven effective. U.S. coal plants, for example, have succeeded in cutting emissions over the past several decades, thanks to both advanced scrubbing systems and newer, high-efficiency, low-emissions technologies.

Aging coal plants both in the U.S. and abroad are already being replaced by newer, cleaner plants. This trend could be accelerated if the environmental elite stopped clinging to ideology and simply focused on more practical solutions.

Supporting, instead of opposing, clean coal technology deployment might even help greens improve their standing with working Americans. There’s a reason why climate change is not an issue that moves the political needle with average voters. Vast U.S. coal reserves can serve not only global markets but also stimulate new combustion technologies and help American workers struggling with low-wage jobs.

The environmental goal of reducing global carbon dioxide emissions is not at risk from coal. It’s at risk from powerful interest groups that prefer doctrinal purity to practical solutions. If the goal of reaching the UN target is receding, it won’t come any closer by simply demanding that coal stay in the ground. 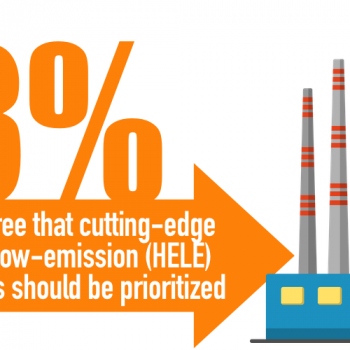